SheKnows: In the sideways world, it was a kinder, gentler Ben. It must have been nice to not have your bad guy hat on. 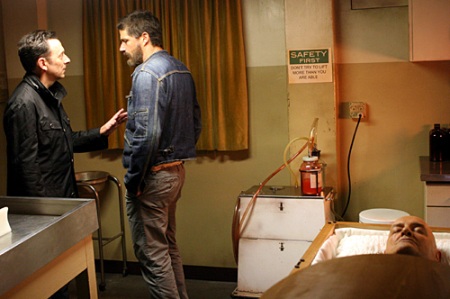 Michael Emerson: It was. It was nice to figure out how he would be in a kinder, gentler narrative — or a more everyday narrative. The traces of ambition and manipulation were still there, but so much more muted. It was not dominating his personality.

SheKnows: Then, there’s the connection with your on-screen daughter that as an audience member, it just felt good to see after she died because of Ben’s lack of action, honestly.

Michael Emerson: Such a nice variation on the original theme of their original relationship.

SheKnows: Now Lost creators Damon Lindelof and Carlton Cuse have such infinite imaginations. As an actor, what was the experience like being a part of their world?

Michael Emerson: One of the real bonuses of the work was to have a symbiotic relationship with brilliant writers. It wasn’t like we talked often. I never spoke to them on the phone. We never had character meetings. We seemed to communicate by way of script and me by way of performances. It became a kind of dialogue in an interesting way. It was nothing like I’ve ever experienced before. I could tell they were paying attention to me and customizing the role to suit whatever they thought were my strengths or weaknesses. It was nice to see how much attention they were paying to me, without anything ever being said. 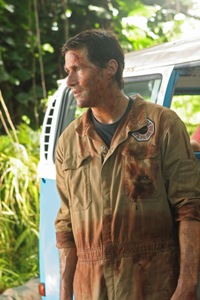 SheKnows: For you as the actor behind Ben, what was your reaction to having to film an additional 12 minutes that would land on this DVD that we are about to see?

Michael Emerson: I was thrilled. I had heard rumors there was going to be an extra scene. I hoped that I would be in it. Then, to find out I was in it in such a significant way, I was delighted. I think I was as excited to shoot the extra as I was the finale.

SheKnows: Working with Hurley, Jorge Garcia, on this particular part, was it nice for the two of you to connect? You rarely shared scenes with Jorge.

Michael Emerson: It was relaxing. It was a spoonful of sorbet. It was this nifty little dessert at the end of this great, long meal. I had not done much scene work with Jorge over the years, you’re right. It was nice. Our friendship had blossomed near the end of the series, so it was nice to spend some more time with him filming the extra for the DVD.

SheKnows: Also, you’re so personally vested in the character of Ben. When you found out your character would stay on the island, obviously off screen after the show ended, as Hurley’s second in command — what did you think of that fact that Ben would remain on the island that he adored so much?

Michael Emerson: I thought it was perfect. It was a nice character evolution that the writers were offering us, that he was learning things about life and about himself. He was transforming into a more serene and less tortured character that might yet have potential to do great good.

SheKnows: In the final scene of Lost, Ben was waiting outside the church. He didn’t go in the church. Why do you think he wasn’t ready to go in there with everyone else?

Michael Emerson: Because Ben had done more wrong in his life than the others, I think. He shouldn’t be let off the hook so easily. I thought it was nice, he knows he has work to do. I don’t know what that work is exactly, but it is the work of redeeming himself. He has to stay in whatever you want to call it — purgatory of a sorts — until he feels he has the right to pass into death for eternity that everyone else was heading for. It may also be that he was waiting, because if you notice, people could only pass into eternity two-by-two. They have to go in the company of their mirror redeemer. I’m not sure Ben had found that yet.

SheKnows: Perhaps someday he’ll walk in there with his daughter…

SheKnows: There were a lot of themes and profound ways of thinking on the show Lost. What were the ones that touched you the most?

Michael Emerson: I like the non-religious spirituality of the show — especially the ending. I like the sense of timelessness in the show. I thought, instead of thinking time travel or movement in time in science fiction ways, the writers thought about it in more esoteric or poetic ways that I thought were fascinating.

Read on for more Lost

Lost finale: What happened?
50 Lost trivia questions!
Own a piece of Lost