While in town checking out filming locations, Angelina Jolie sat down with Naveed Hussain, UNHCR (United Nations High Commissioner for Refugees Representative) in Bosnia and Herzegovina and Haris Silajdzic, a Muslim member of the Bosnian tripartite Presidency, during a visit to Sarajevo, Bosnia. Sarajevo happens to be the site of Jolie’s next major motion picture. 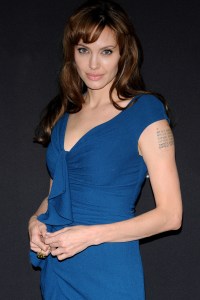 The as-yet untitled movie is a romance set against the 1992-1995 Bosnian War, Reuters reports, and Jolie will play one half of a couple who meet just before the savage war begins. It’s “a love story, not a political statement,” Jolie said in a statement, adding, “I would like to involve as many local people as possible and learn as much as I can.”

Angelina Jolie, 35, who is a UNHCR Goodwill Ambassador, made a surprise visit to the Eastern European nation on Saturday to discuss the plight of returning war refugees. She is expected to use her time in the formerly war-torn country, when not filming, to support education and other projects to help young Bosnians returning to homes they left during the war.

Jolie also said she wants the film’s cast to include actors of all ethnicities from the country formerly known as Yugoslavia.

After spending the spring and summer in Venice, Italy, shooting The Tourist with Johnny Depp and traveling the world to promote Salt, Angelina is expected to head to Sarajevo while her hubby, Brad Pitt, is filming Moneyball in Los Angeles and Oakland, California.