Karissa Shannon is one of those names floating around in the Internet ether, like Rachel Uchitel or Jodie Fisher (not Foster), ticking like time bombs toward the end of their fifteen minutes of nefarious fame. 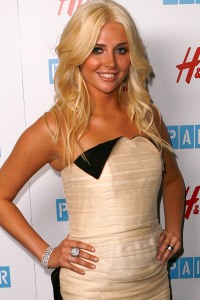 So who is Karissa Shannon? A girl who’s had myriad levels of fame throughout her short 21-year-old life.

In 2008, Hugh Hefner chose then 18-year-old Karissa and her twin sister, Kristina, known as “The Shannon Twins” or “The Shannons,” to be two of his three new girlfriends, replacing Bridget Marquardt and Kendra Wilkinson on the E! reality series, The Girls Next Door. (Crystal Harris would replace Holly Madison as Hef’s “Number One” girlfriend who gets to share Hefner’s bed. Lucky her.)

Not long after being knighted girlfriends, details of the girls’ checkered past started to hit the news. In St Petersburg, Florida in January 2007, the twins were charged with aggravated assault after they reportedly got into a fight with two other people at a house party. They were put on probation and required to pay restitution, but the arrest came on the heels of Karissa’s previous misdemeanor battery charge in November 2007.

For more legit attention, “The Shannons” also appeared as Miss July and Miss August 2009 in the double issue of Playboy and have a minor, brief cameo in Sofia Coppola’s new film, Somewhere.

Getting back into the dark side, Karissa announced last month that she’s dating actor Sam Jones III. Once known for his work as Pete Ross on Smallville, Jones was arrested in October 2009 by Drug Enforcement Administration agents as part of a plot to illegally purchase and distribute over 10,000 oxycodone pills. He was charged with conspiracy to possess with intent to distribute and faces up to 20 years in prison.

Again, this girl is nothing but class all the way. These days, Karissa is back in the news for taking part in a sex tape. No big shocker there, but the reason the sex tape is blipping on anyone’s radar is because it co-stars Heidi Montag and is being hawked by Heidi’s possible ex, possible current husband (really, does anyone care?), Spencer Pratt.

After that comes out, we can probably forget Karissa exists again until her next assault arrest or drug ring association. Goodie.