There has been a baby bump watch on Mariah Carey since the beginning of the summer and new concert photos will do nothing to quiet the rumors. Whether or not the singer is pregnant has been a hot topic, one that husband Nick Cannon commented on by saying, “She will announce a pregnancy on her own terms.” 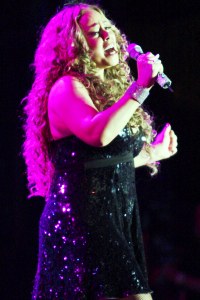 Carey told her fans, “Tonight was tough for me for personal reasons, but you got me through.”

Could a pregnancy be the personal reasons Mariah Carey was referring to?

After her 15 song set, she tweeted, “Seriously, I really do love it here, beautiful people inside and out! Tonight was tuff 4 me 4 personal reasons, but U got me thru! L4L.”

Concert photos show what clearly looks like a baby bump [at right!].

Is she or isn’t she? Or, are you just getting sick of these pregnancy rumors?