The Creative Arts Emmy Awards has honored the behind-the-scenes talent of your favorite TV shows! 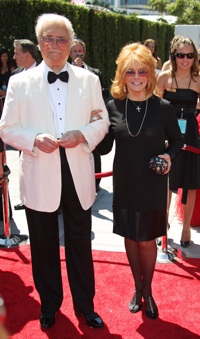 These special Creative Arts Emmy Awards are presented to recognize the particular achievements of the technical side of the biz, plus guest appearances.

The always fabulous Betty White took home the statue for Outstanding Guest Actress in a Comedy Series for hosting Saturday Night Live, bringing her total career Emmy count to seven. Unfortunately the last standing Golden Girl was not around to pick up her award. Getting a standing ovation instead was Ann-Margret, who won Best Guest Actress in a Drama Series for her turn on Law & Order: SVU.

The event will air in a two-hour special August 27 at 1 pm on E!

Best Casting of a Movie-Mini Series: The Pacific

Best Prosthetic Makeup for Series, Movie or Mini: The Pacific

Best Makeup for Movie or Mini (Non-Prosthetic): The Pacific

Best Costumes for a Series: The Tudors

Best Choreography: Mia Michaels, So You Think You Can Dance

Best Art Direction for a Single-Camera Series: The Tudors

Best Picture Editing for Nonfiction Program: By the People: Election of Barack Obama

Best Visual Effects in a Movie-Mini Series-Special: The Pacific, Part 5

Best Sound Mixing for a Comedy or Drama Series: Glee

Best Sound Mixing for a Mini Series-Movie: The Pacific, Part 2

Best Tech Direction for a Series: Dancing with the Stars

Best Tech Direction for a Mini-Series-Special: Rock and Roll Hall of Fame Concert

Best Direction for Nonfiction: My Lai

Best Nonfiction Special: Teddy: In His Own Words

Best Commercial: The Man Your Man Could Smell Like — Old Spice Body Wash