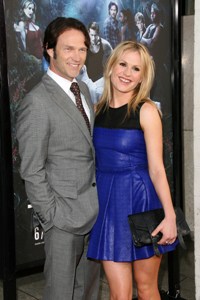 The couple said I do under a tent situated on a grass lot near the beach. The newlyweds then celebrated at a nearby house with family friends.

According to Stephen Moyer the couple waited to go public with their romance until February of 2009 for personal reasons. Moyer said it was “very intentional on both our parts. It was very important to me that the cast and crew we were working with didn’t feel it was fickle. We didn’t want to take anything away from the show.”

The Canadian-born Stephen Moyer proposed to his New Zealand-raised bride Anna Paquin on a Hawaiian beach. Moyer supposedly designed the diamond set in an antique platinum inset with jeweler Kathy Waterman. The couple’s romantic engagement setting was the perfect place to pop the question.

“There was a song in the first season, White Sandy Beach in Hawaii, which was kind of funny and ironic,” he told Access Hollywood. “It all started out as a joke and then we decided to go to Hawaii with my kids.” Stephen Moyer has one son, Billy, and one daughter, Lilac, from previous relationships.

Stephen Moyer splits his time between his native London and the Venice, California home he and Anna Paquin share.