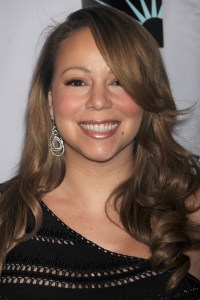 “There was a serious lack of crazy on the Idol panel last year. Mariah Carey would fix that right up. The chance of a major wardrobe malfunction as she overexposes all of her womanly bits might make producers nervous, but if Simon can flash his cleave, why can’t Miss Carey?”

Last week, Carey’s husband and America’s Got Talent host Nick Cannon told The Hollywood Reporter that his wife “would love” to be an American Idol judge. According to E!, a source close to Carey says, “She wants it. She’s seen what America’s Got Talent has done for [Nick] and thinks it will be a good career move.”

Plus, she’s been friends with Randy Jackson for years.

Although Carey’s reps claim there’s nothing to report, inside sources say there are still a few “sticking points” before a final deal can be signed.

Just like Steven Tyler, the prospect of watching Mariah Carey witness the butchering of her material is too delicious for words. A trembling teenager warbling their way through Vision of Love while she looks on and Randy Jackson laughs into a piece of paper? That is must see TV!