Madonna is being sued by another clothing manufacturer over her Material Girl junior’s line. 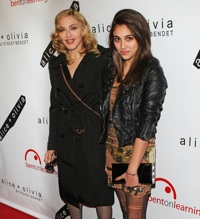 The collection, carried only at Macy’s, was heavily influenced by Madonna’s daughter Lourdes Leon and features items that would have looked perfectly in place on Madonna herself in the early 1980s. But another clothing manufacturer is calling foul on the name of the line.

According to TMZ, LA Triumph Inc said they have been marketing a line under the Material Girl trademark since 1997, and quite successfully at that — they say they’ve sold millions of dollars worth of threads.

According to the suit, LA Triumph has been “continually selling similar clothes in similar retail outlets at similar price points under their Material Girl brand since at least 1997, and Madonna and her newfound company do not have the right to trade in the same space under this brand.”

They are not very amused over Madonna’s acquisition of the name — even though it stems from her own song — and are asking a federal judge to declare that Madonna’s use of the moniker creates deception in the marketplace. What else are they asking for? Nothing less than all of the profits Madonna and company have earned off the line so far.

You’d think Madonna would have business people in her corner who would check into this sort of thing before launching a multi-million dollar brand. Did someone drop the ball, or did they figure it would be easier to ask for forgiveness later (with the help of a fat monetary settlement)?