With the effort of crafting a Nanny McPhee Returns review, the phrase “beauty lies in the eyes of the beholder” has never been truer. Emma Thompson returns as the title character, a magical nanny who arrives on the scene to save a family from a perfect storm of life’s overbearing moments. 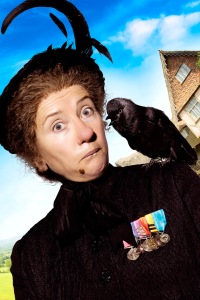 In Nanny McPhee Returns, the family in question is led by Maggie Gyllenhaal. During World War II, Mrs Green is alone on a farm in the countryside of England and raising three small children. To add to her maternal stress, two young cousins moving from bombed-every-night London are on their way.

How Emma Thompson has written her script makes a film viewing experience that does not require having seen the original Nanny McPhee.

Thompson’s keen enough to have the film begin from the eyes of the two privileged children riding out to a relative’s country farm, despite their intense objections. They know nothing of Nanny McPhee and neither does the family at the end of their journey, the Greens.

Mr Green is off fighting in the war and when the cousins arrive, the fragile control over the house that Gyllenhaal’s character once possessed, is completely gone. Then, there’s a knock at the door by one of film’s finest nannies.

Childish, but that’s a good thing

The Nanny McPhee movies could simply be surface films. Their weight is delivered in how Thompson’s characters learn lessons about life. In order to keep it squarely aimed at children, the use of childish plot points may escape older audiences, but simply gaze to your right or left and the look of amazement coming from the nearest child in the audience means this film has scored.

Maggie Gyllenhaal gives it all

Head of the Nanny McPhee class in Nanny McPhee Returns is Maggie Gyllenhaal. First, her accent is impeccably British. With a perfect blend of London society and rural sensibility, Gyllenhaal again proves she is the actress of her generation to keep an eye on for a career mirroring many of the greats. 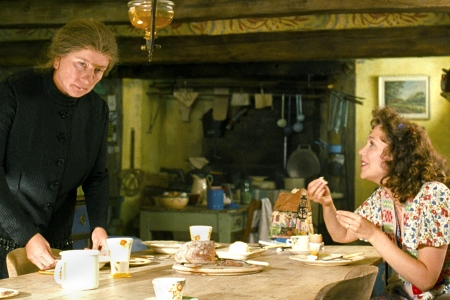 Second, her harried ways in Nanny McPhee Returns make the arrival of the title character a necessity for all the characters on screen and the audience as well. Even for experienced moms of many, Gyllenhaal’s character has her hands beyond full! And finally, Maggie Gyllenhaal radiates movie star qualities in the magical film. One can sense her overwhelming presence on a movie set filled with child actors, a cinematic situation that could have gone one of two ways: Absurdly cartoonish or believably cute.

Emma Thompson always amazes us with her talent. As a screenwriter, Emma Thompson has scored with Nanny McPhee Returns. The Oscar winner for her screenplay of Sense and Sensibility again showcases her gift of words. As an actress, Thompson is at the top of her game as Nanny McPhee. Even with prosthetics and make-up that took hours to get in place, Emma emits electricity regardless of whether she wields her magic cane or not.

The kid stays in the picture

Also a gift of Nanny McPhee Returns is young British actor Eros Vlahos. A stand-up comedian at age eight, his timing on the big screen reminds us of a young Peter Sellers. 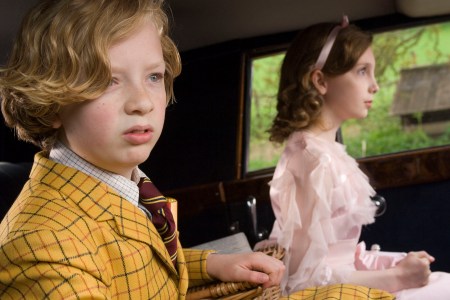 In a who’s who of British film’s fantastic guest spots, there are numerous performances from some of the UK’s best thespians. Rhys Ifans rocks as the evil brother-in-law who wants Maggie Gyllenhaal’s Mrs Green to sell the farm while his brother battles in World War II. Maggie Smith reminds us once again why she is one of the all-time masters at scene-stealing. We won’t say much about his character, but Ewan McGregor is a surprise that is sure to muster an audience-wide smile.