Spencer Pratt is planning a tell-all book about his relationship with soon-to-be ex Heidi Montag. 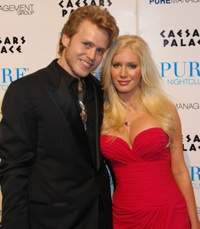 Mother and daughter relations have been strained since Heidi and Spencer started dating — Darlene obviously hates the guy as much as the rest of us — and completely fell apart after Heidi’s marriage and extensive plastic surgeries.

Now Spencer is going to tell us every last dirty detail.

“My last book, How to be Famous, didn’t make the New York Times best-seller list because it was in the self-help section,” Pratt told Us Magazine. “This one is going to be totally different. I’m not holding anything back.”

Our suggestion for the title? Taking D-Baggery to the Next Level by Spencer Pratt.

Heidi is super pissed about this, of course. She told TMZ, “This is exactly why I left him. Right now I’m looking into my legal options.”

Heidi left Spencer earlier this summer after a short-lived marriage. The couple’s divorce is due to be finalized on Valentine’s Day.