It’s good to be Jerry O’Connell these days. Not only did he and his wife Rebecca Romijn come out for the recent premiere of his film Piranha 3D, but he will also star in the upcoming fall TV series The Defenders with Jim Belushi. 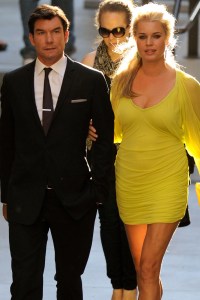 Leaving their one-and-a-half-year-old twins, Charlie and Dolly, at home, Jerry O’Connell and Rebecca Romijn stepped out for the premiere of Piranha 3D at Mann’s Chinese 6 Theatre in Hollywood on August 18.

As O’Connell told ET Online at the premiere of the cheesetastically guilty pleasure, “The kids are not coming to this movie. They’re home. They’re with a sitter; the missus and I are coming out to a scary movie. It’s going to be a good time.”

Jerry O’Connell plays a Girls Gone Wild-type director in Piranha 3D, which is about an underwater tremor that sets dozens of prehistoric man-eating fish loose in Lake Victoria during spring break.

As for The Defenders, Jerry O’Connell plays a fast living, flashy Las Vegas attorney who represents an eclectic list of clients with his partner, played by Jim Belushi. 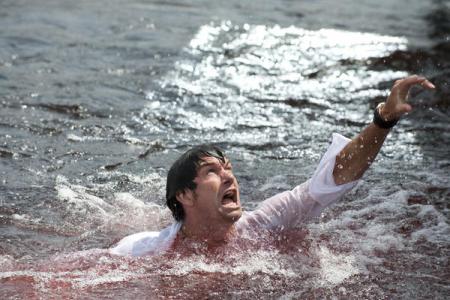