Jennifer Aniston has been attacked by Bill O’Reilly for glamorizing single parenthood. SheKnows was in attendance at the press event in which Aniston answered many questions about her new off-beat romantic comedy The Switch and we’re providing you with more of Jennifer’s comments.

SheKnows is also happy to include the funny and warm exchanges between Jennifer Aniston and her friend and leading man Jason Bateman, who had plenty to say on parenthood, his character in The Switch and whether or not he believes that men and women can ever truly be just friends. 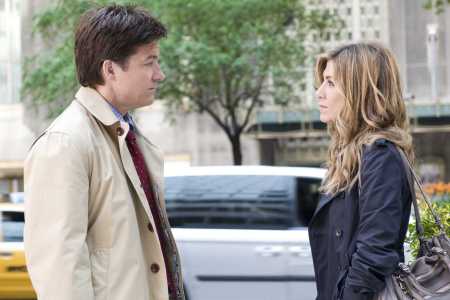 We noted that Smart Water had been placed in front of the talent and filmmakers. Jennifer Aniston is a spokesperson for the product and we noted that she carefully wrapped a napkin around her bottle of water and gracefully poured it into her glass like a waiter in a posh restaurant — cute quirk Jen!

Picture Jennifer Aniston as she wore a sleek LBD from Alexander McQueen and Jason looking very GQ in black slacks and jacket over a gray dress shirt.

SheKnows: Jennifer, you look great today. How do you keep in great shape?

Jennifer Aniston: I’m eating very well. I indulge when I want to indulge. I work out often. I do yoga. I do everything. I kind of change it up. I try to do something at least even if it’s just 20 minutes a day just to get your body sweating and blood pumping. It gives you a good day of energy.

SheKnows: Did you go on a run today?

Jason Bateman: She’s doing it right now [he looks under the table].

Jennifer Aniston: I have the Suzanne Somers thing underneath this desk [she laughs].

SheKnows: Jennifer, do you feel that your character Kassie is the new modern woman who chooses her own fate, when she wants it and how she wants it? Do you encourage women to step up and take action on what they want?

Jennifer Aniston: I think that’s what this movie is. It supports that. It supports what is currently happening in our world today. We, as women, have the choices and options of when or how to have children as we have evolved as a society. More and more, I think women are realizing they don’t have to settle. They don’t have to just sort of settle with a man just to have the child. I think they are realizing if it’s that time in their life and they want this part, they can do it with or without that. I think it’s just sort of happening more and more. You know, people aren’t having kids in their 20s. So times have changed. That’s also what I think is amazing is that we do have so many options these days as opposed to in our parent’s generation when if they were told “You can’t have children” or “You have waited too long” and that’s it. Your only option was adoption.

SheKnows: What’s the role then for the boyfriend or the husband now if the girl can do everything by herself?

Jennifer Aniston: I don’t know. I think it’s about really finding that person that means something and not settling. I mean we know a lot of single people happy as a lark. We know a lot of married people pretty much not as thrilled as they would like to be.

The Switch: Spotlight on the modern woman

SheKnows: Do you feel you have learned something from playing Kassie? 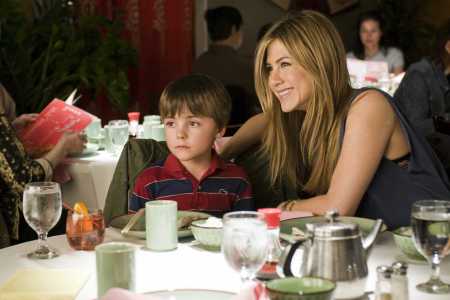 Jennifer Aniston: I’ve learned something from Kassie. I have learned something from every character I’ve played especially in this case. Women in my life have gone through the struggles and heartbreak and frustration of fertility and adoption and all of that. I think that’s why it jumped out of me so immediately, the connection I had to it because I thought it was something very timely and progressive that hadn’t been really discussed and to have a love story woven through it was just sort of beautiful and it’s hysterical… at least I think.

SheKnows: Jason, does the modern woman scare you?

Jason Bateman: That’s why I stick to men. I’ve had it with them [laughs]. No, the modern woman is exciting to me because I’m married to one. I’m sure the old fashioned woman would have been great too but I’m living in the modern age. I like women. [What happens in this film] is something that I guess you would have to label it as progressive but it does seem to be a little overdue because women have been making some of the better decisions for our planet for quite some time. Of course they can have a child without a clumsy man around. In this movie, she decides to have the kid first and the guy second. Why not? A lot of people are doing that.

SheKnows: Jason, your chemistry with child actor Thomas Robinson, who plays Sebastian, is incredible. How did you work with Thomas to develop that relationship and did your own experience as a child actor help?

Jason Bateman: It wasn’t tough to get chemistry with him because he’s such a good guy and talented and kind. He’s got great parents. The experience that I had growing up being a young actor was helpful because I sort of remember that point of view literally from in front of a big black camera and a hundred people standing behind it waiting to be released to lunch until you get your line right. I mean, it’s nerve wracking. He was six I think. I don’t know how somebody who is three years into speaking the English language was able to take what was a new language to him and be able to manipulate it and sort of find some nuance in the way that he delivers a sentence that he barely understands. He’s really talented.

Up next…Jennifer dishes babies and tabloids!