As Britney Spears tweets a photo of herself on the Glee set, we realized we have some serious Glee withdrawal! There are just so many times we can re-watch Neil Patrick Harris’ episode, Artie doing The Safety Dance or Kurt using Single Ladies to kick a field goal, before we demand the return of Glee, the best show on television!

With one month and two days left until Glee’s return to Fox on September 21 at 8 pm, yesterday offered a little preview to what we can expect in the upcoming season. 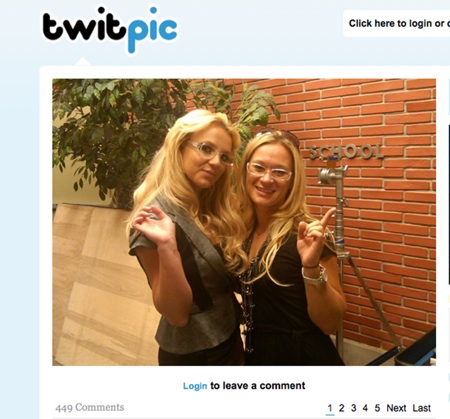 After campaigning mightily to have a show devoted to her music, a la the super brilliant Madonna episode from last season, Britney Spears got her wish and provided photographic proof that it’s game on.

On a break from her filming, Spears posted a TwitPic of herself and her assistant Brett Miller in costume and camera ready.

“About to do my first shot of the day for Glee tweeties! Here we goooo!” Spears tweeted, adding later, “What’s up GLEEKS? Having so much fun on set!! Can’t wait for you guys to see the episode!”

Unlike the Madonna or Lady Gaga episodes, Britney will appear on the show dedicated to her music. You know why? Because home girl has nothing else to do and is in dire need of a comeback.

The fading pop princess’ appearance will be more Where’s Waldo? than Neil Patrick Harris’ power guest star role. Instead the episode focuses on Heather Morris’ character, Brittany. Earlier this month, Heather spoke to MTV News, exclaiming, “I get to do Britney Spears!” Although she didn’t give up specific details of the show, she said, “I like Toxic the best or the [I’m a Slave (4 U)] video. It was always her best performance. She’s rocking! I don’t care what I do.”

While Jenna Ushkowitz also confirmed that Lea Michele will belt out Britney’s hit “…Baby One More Time,” Glee creator Ryan Murphy has kept the episode under wraps. His only insight was to say that Spears will “kind of” play herself.

We’re still hoping to see a New Kids on the Block episode or the return of Marky Mark and his Calvins, with Mark Wahlberg, Mark Salling and Cory Monteith in a tighty whitey battle for supremacy.