Sandra Bullock recently said that she and her ex-husband Jesse James “have both moved on.” Now it appears James is moving on with an inked-up reality star also on the mend after a split. She looks a bit like Michelle McGee if we do say so ourselves! 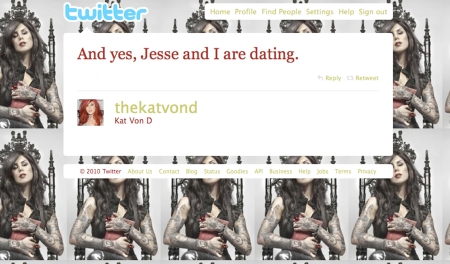 Kat, who certainly sports the requisite number of tattoos to float Jesse’s philandering boat, split from her boyfriend of two years, Motley Crue member Nikki Sixx, earlier this year and has also been plagued with infidelity rumors dating back to her divorce in 2007 from her first husband, fellow tattoo artist, Oliver Peck.

The rumor mills went into overdrive this weekend after the pair was spotted holding hands and having dinner at the Palms Casino Resort’s N9NE restaurant. Kat, 28, and Jesse, 41, left the restaurant together in his black Mercedes and reportedly spent the night together. 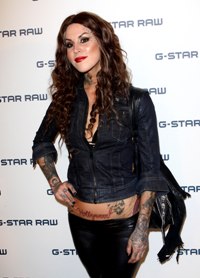 According to a source, “Jesse and Kat drove to Las Vegas together in Jesse’s car. It was just the two of them and they slept in the same room. They have been friends for years, but this is the first time they are both single.”

Once news of the liaison hit, both reality stars’ reps immediately went for the old standby, “They’re just friends,” but, as usual, the truth came out via Twitter.

“And yes, Jesse and I are dating,” Kat Von D tweeted yesterday.

You can’t get a better confirmation than that!

Even though she quickly took the message down, it had already been re-tweeted over 100 times.

Just remember, kids, a tattoo of your lover’s name is the quickest way to ensure a break-up, so let’s keep the ink on the show, shall we? Oh, and, Jesse James — let’s keep it in your pants this time.

Nothing says true love like two people on the rebound.

Read on for more Jesse James

54 mins ago
by Summer Cartwright