As the announcement arrived that Chelsea Handler is hosting the VMAs, a thought immediately popped into our heads: Just what MTV needs, more vodka soaked blathering on the air! 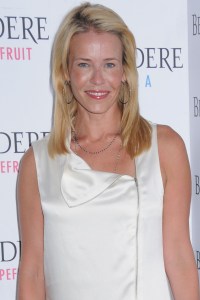 Chelsea Handler, host of E!’s late night talk show Chelsea Lately, will emcee the MTV Video Music Awards on September 12, taking over for Russell Brand, who has headlined the show the last two years in a row.

“This has been a huge year for hip-hop and rap, and it is well-known that I have the closest ties with these communities — musically and sexually,” Chelsea Handler, who is actually dating Animal Planet star Dave Salmoni, said. “I am to rap and hippity-hop, what Warren Buffett is to finance, minus the sex.”

It’s jokes like that which give us serious pause, not about Chelsea as an awards show host, but as a comedienne in general. In our opinion, Handler is to funny as Twinkies are to healthy.

But she doesn’t care, or at least puts on a good show of seeming not to care, tweeting, “Thank you to everyone for ur excitement about the vmas. And 2 those of u who hate me, thank you 2. I’d be a real loser if everyone liked me.”