Jennifer Aniston and Cher are victims in a credit card scam — and it’s all because of their hair! 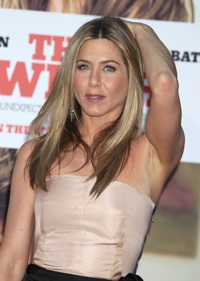 Maria Gabriela Perez was busted by the US Secret Service for operating a major credit card scheme. Her victims were stars like Jennifer Aniston, Cher, Liv Tyler, Melanie Griffith, Anne Hathaway and Scott Speedman — all former clients of Perez’s salon.

Here’s how it went down: Perez allegedly copied down the credit card info of her high-profile clients, then later used the accounts to run up about $280,000 in charges in a single year. That’s a lot of shampoo.

Jennifer Aniston addressed the issue on her Good Morning America appearance and ranked Perez right up there with Angelina Jolie in the uncool department. “We had a situation that was not cool so I just stopped going to her,” she said.

Aniston hinted that she knew the arrest was imminent, saying “I knew something like this would eventually happen because there’s no way you can get away with that. It’s terrible.”

She also said her situation “wasn’t to the extent of the other girls.” TMZ reports that Liv Tyler got taken for $214,000!

Perez was arrested on federal fraud charges and is due to appear in court this week.