Maggie Gyllenhaal was all too eager to join the world of Nanny McPhee in Nanny McPhee Returns. After all, Gyllenhaal and Nanny McPhee creator Emma Thompson became friends on the set of Stranger Than Fiction, but never acted together. The mother of three-year-old Ramona also reported that unlike Nanny McPhee, who has a set of lessons children must learn, Gyllenhaal figures her child’s lessons will come when her daughter is fully grown. “It changes. I think it will continue to change,” Gyllenhaal said of imparting wisdom to Ramona. “I don’t think there’s an overreaching one. I think when I get to the end, I will be able to say: That was a lesson.”

Maggie Gyllenhaal shot to the top of public consciousness with her unnerving performance in Secretary. Her stellar string of film work continued with Mona Lisa Smile, SherryBaby, Stranger Than Fiction, The Dark Knight and Crazy Heart.

Maggie may we talk?

SheKnows: As the maternal influence over five children on the Nanny McPhee Returns set, what was your most memorable scene with the kids? 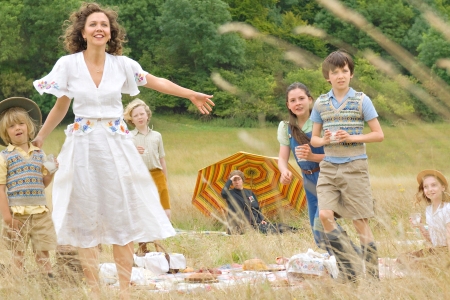 Maggie Gyllenhaal: I like the scene, which took us five days [to shoot], which I’ve never done before, not on Dark Knight, not on Mona Lisa Smile, any of these movies, ever. Five days shooting was this scene where I come home from work and the skies are saying, “The person you need is Nanny McPhee.” I’m covered in syrup, I come home and the kids are fighting, everything’s crazy. I’m kind of hallucinating. She comes in and brings order. That whole madcap scene, that was my favorite.

SheKnows: I was told that one of the child actors cried after you set off back to America.

Maggie Gyllenhaal: They’re great kids. Also, that was part of my job to make it believable that I was a mother to them. It felt real. Also, when you’re working with kids, it’s different than grown-ups. Emma and I would be on our knees behind the camera making fart noises, or saying a line for them over and over again fifteen different ways to get different reactions from them. You get invested in them in a different way.

SheKnows: Ever get crazy like that at home for you?

Maggie Gyllenhaal: Well, I have one child. I don’t know, if I had to take care of five children alone and try to make a farm run and work at a general store, I think it would be possible to get that crazy.

SheKnows: How did you keep the energy level up for scenes like that? Five days!

Maggie Gyllenhaal: It’s hard. It’s not what comes most easily to me. The crazy hard stuff, that’s my gig. I love that. Shoot it quick, that’s my thing. This technical work is more of a challenge, but I liked it. That’s what’s difficult is how do you keep it fresh and alive.

SheKnows: The clothes of your character were so warm with bright colors, how much input into the process did you have? 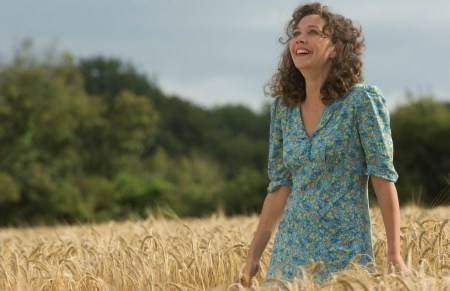 Maggie Gyllenhaal: I always input into the wardrobe, that’s how I like to work. Emma said at one point when we were talking about the wardrobe, that she thought that Mrs Green should feel like an English garden that you just want to lie down in. I agree. Then, Jacqueline Durran, who did the wardrobe, is the most collaborative wardrobe costume designer I’ve ever worked with, constantly interested in what I felt. I think that Mrs Green is somebody who does care about what she looks like and loves getting dressed up. She just doesn’t have the time to consider it. She strikes me as the type of person who is heading out and would grab a flower and just stick it in her hair [laughs]. You think about those things when you’re a mother and don’t have time to spend too much time on your clothes. I, personally, always have a hair band on my wrist in case I, or my daughter needs it. I think Mrs Green has those kinds of things, you know, when you reach in your pocket and pull out a bag of cheerios [laughs]. How did this get there? Oh yeah, I remember [laughs].

SheKnows: The mud looked like it was everywhere on the Nanny McPhee Returns set, was it ever simply too much [laughs]?

Maggie Gyllenhaal: I’ll tell you a funny story. In the flashback scene where I’m in the wedding dress, we were shooting it and I guess someone from props was trying to be helpful and put down a yoga mat because I was going to have to step out of this horse drawn carriage into the mud. My husband was going to carry me out from the mud into the house so I wouldn’t get dirty. So, I come out of the carriage and I stepped on it and slipped. I completely bit it in this wedding dress in the mud. It was a tiny little flashback, so we only had one wedding dress.

Maggie Gyllenhaal: Yes! It was the first take with this dress and this yoga mat killed it. We made it work. I liked the mud. It was kind of a funny challenge. It makes everything funnier.

Up next…Maggie dishes living in England for the last several years and how she and Peter Sarsgaard are heading back to film a movie together!