Jenny McCarthy has a new man in her life and after teasing about him on Twitter, he’s finally been revealed as Las Vegas resident Jason Toohey. 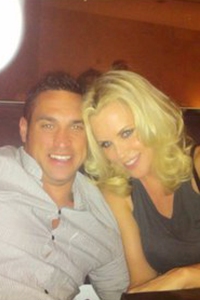 Jenny McCarthy broke up with Jim Carrey in April and it seems Jenny McCarthy is ready to move on. According to People.com, she has been dating former fitness model Jason Toohey for about two months and is even staying with him in Las Vegas.

As she told People, “I’ve been living in Vegas for about a month. My house is under construction right now in LA, so I very well could be here until it’s done. It’s been awesome here.”

Jenny McCarthy has taken a different approach to love this time, as Jim Carrey’s replacement is no high profile Hollywood fixture. In addition to being a former fitness model, Jason Toohey has been seen in Treasure Island’s Sirens of TI show and is the founder of Eyedews, an under-eye mask treatment, which the actress has been promoting on Twitter and on Las Vegas television.

The new duo have been spotted on several dates around Las Vegas and were seen smooching at the Midsummer Night’s Dream party at the Palms Casino Resort, which Jenny McCarthy hosted.

Focusing on “change and growth” these days, McCarthy told People, “I’m really happy [and] I’m looking forward to the future.”