Jennifer Aniston and Jason Bateman star in The Switch and we landed on the red carpet first ready to bring you what the stars had to say about their new flick. 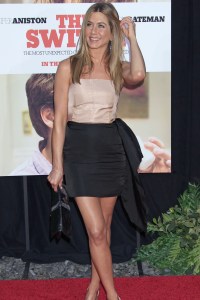 The Switch also stars Juliette Lewis, who found working with Jennifer Aniston, the superstar, quite appeasing. “Jennifer was really easy to work with, a very warm, giving person. We bonded right away, like sisters,” Lewis said.

Juliette Lewis is Jennifer Aniston’s friend in The Switch and like the actress in real life, her character is a little this side of normal. “I play Jennifer’s kind of bohemian, eccentric friend. I throw her an insemination party. I’m playing that girl,” Lewis said and laughed. Lewis connected with her character’s position in being there for a friend who is about to go through a major life change. “She’s being supportive for her friend. Who doesn’t want that?”

Jennifer Aniston stepped up to the microphone eager to heap praise on her longtime friend and one of the funniest people she knows, Jason Bateman. “It was fantastic. It made it so much easier. I felt like I was going to work with my brother,” Aniston said and laughed.

Aniston also commented to SheKnows about the prevalence of actresses over 40 who are permeating the massive magazines such as Elle, Vogue and Harper’s Bazaar — including her current cover. “I just think women are being celebrated at every age, and that’s how it should be.”

Jason Bateman concurred with Lewis, but also stressed how it was nice to finally do a film with one of his best friends in Aniston. So, how far back does his friendship with Jennifer Aniston go? 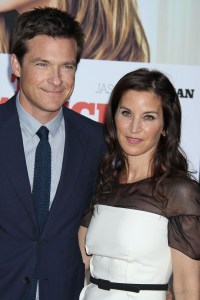 What was the most challenging part of filming with a friend? “When we were fighting, that was the tough part.”

Finally, Bateman also admitted that the film reflects his own marriage.

“Well, we were best friends when we got married, and I highly recommend that. Because when girlfriends and boyfriends get old, I guess, you get tired of them, but you never get tired of a good friend,” Bateman said.

“I think that’s what this movie’s about.”