Gossip Girl is set to return in less than a month, but you can get your sneak peek now! Every fall, the Gossip Girl cool kids return to the CW with stories of their European adventures. This time, we get to travel with them and SheKnows has a preview clip! 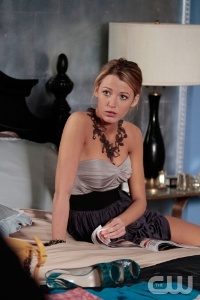 The new season of Gossip Girl takes us to gay Paris for two episodes and the first bit of not so surprising news is that Chuck Bass lives.

Though left for dead in the finale, Chuck survived the mugging and looks as dashing as ever. The near death experience has even inspired the schemer to become a better man, but few Gossip Girl fans believe he’ll succeed at that.

While Nate makes the most of Chuck’s little black book and Dan adjusts to his new role as a daddy, gal pals Blair and Serena are taking Paris by storm. This time, instead of hearing the girls gush about their adventures at the Musee d’Orsay, the Eiffel Tower, Avenue Montaigne or Gare du Nord, we will actually get to see them there.

The besties go totally boy crazy together in Paris, but it appears they’re heading for yet another frenemies blowup.

What the preview clip doesn’t reveal is where the end of summer will find Blair and Chuck, as a couple. They certainly seem surprised to run into each other…

SheKnows can tell you that if Blair still has designs on Chuck’s heart, she may have a bit of competition this season. French Harry Potter star Clemence Poesy enters the fray as Eva, Chuck’s newest leading lady.

Another newbie joining the GG cast in the premiere is Katie Cassidy. The Melrose Place alum plays Juliet Sharp, a Columbia student who connects with Nate and will stir up trouble with a seriously juicy storyline.

One face missing from the premiere and a slew of early episodes this season will be Taylor Momsen’s Jenny Humphrey. While the cast is back at work, Taylor Momsen is busy pushing Madonna’s new clothing line Material Girl and touring with her band, The Pretty Reckless.

Never fear, Jenny fans. Jenny is just hiding out after last season’s all time low, which included losing her virginity to Chuck. She’ll be back.

Jessica Szohr’s Vanessa will come home to Gossip Girl, but word is she won’t return from her CNN job in Haiti until the third episode.

In the meantime, catch a Parisian glimpse of what’s coming: