Joaquin Phoenix confounded many when he announced he was retiring from acting to start a rap career.

Now the trailer is out for Casey Affleck’s film I’m Still Here: The Lost Year of Joaquin Phoenix, which follows his brother-in-law’s recent journey. After watching it, the question remains: Mockumentary or documentary? 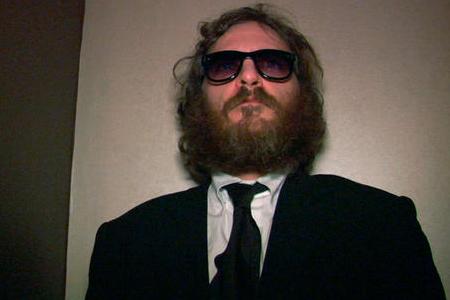 Joaquin Phoenix showed up at a charity event in October of 2008 sporting shaggy hair, a beard and a few extra pounds and announced he was retiring from acting.

“This will be my last performance as an actor,” Phoenix mumbled to E! “I’m not doing films anymore… It’s Casey’s [Affleck] time now…I’m going to do music. I’m dead serious.”

Then the actor hit David Letterman looking even more of a mess and in an infamously awkward interview, revealed he was breaking into the rap biz.

Brother-in-law Casey Affleck has been recording Phoenix’s alleged efforts to become a rap star and with his film I’m Still Here: The Lost Year of Joaquin Phoenix finally set to debut at the Venice Film Festival next month, many are crying hoax, while others are simply tagging the effort a mockumentary.

Word is that the method actor comes off as a jerk with no musical abilities. The latter, at least, is unlikely, considering his work on the soundtrack for Walk the Line. Then again, rapping and crooning like Johnny Cash are not the same thing.

Now Affleck’s trailer for I’m Still Here: The Lost Year of Joaquin Phoenix has dropped, but it doesn’t really tell us anything. Take a look and let SheKnows know what you think: Is this an overly serious documentary or just a case of Phoenix going method for a mockumentary? And would you see this movie, either way?

Read on for more Joaquin Phoenix