Weeds went out with a bang, literally, last season. Tonight, Mary-Louise Parker’s Nancy returns to Showtime and takes the Botwin clan on the run in the new season of Weeds. Big names like Richard Dreyfuss, Jennifer Jason-Leigh and Mark Paul Gosselaar are along for the ride in season six.

The youngest Botwin had been on the road to trouble for a while, but in the final moments of the Weeds season five finale, he arrived with fanfare! 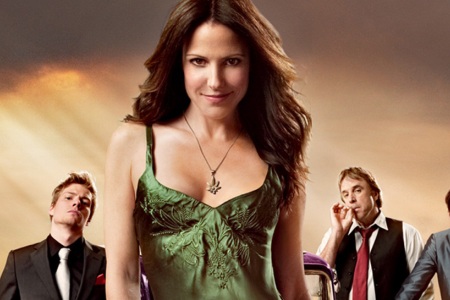 Vicious Mexican cartel queen Pilar threatened Nancy’s boys, so Shane came to the rescue and took out the vixen with a croquette mallet. The season closed with Pilar floating face-down in a pool, setting the ground for a Weeds reboot.

“Last season, to me, was kind of boring, but this season is much more interesting and funnier,” Mary-Louise Parker promised at Comic-Con.

With a murder hanging over his head, young Shane remains disturbingly unruffled and Nancy has no time to get over the shock. She immediately rounds up the Botwins and takes the clan on the run.

Traveling under an assumed name, the “Newmans” head for Montana, Seattle and beyond, which means they’ll be meeting a host of new folks this season.

“She was wonderful,” Parker said of Perkins. “There’s nothing bad I can say about her after six years. She’s so smart, so kind, and hilarious. And I just loved her acting. I don’t think anybody could have done what she did. I would watch her all the time and go: God, I would have never thought to do that.”

“I always wanted him for the part, and it wasn’t going to work out, and then it did work out,” Parker said at Comic-Con. “He showed up and knew all his lines and knew the script. He was more prepared than a lot of actors.”

Nancy is set on going clean this season, but from the previews, it looks like she’ll be tempted to get back into the drug trade. It’s a whole strain of drama on Weeds this season, but some things never change.

Weeds returns at 10 pm on Showtime before the premiere of Laura Linney’s The Big C.