When Steven Slater grabbed two beers and slid his way to unemployment, he became the unsung hero of American workers everywhere. Now the flight attendant might be getting his own reality show. 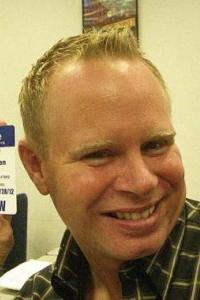 When 38-year-old Steven Slater cussed out passengers over a Jet Blue PA system and dramatically quit his job by jumping down a bright yellow emergency slide with two beers in hand, he became the face of fed-up workers everywhere.

Now TMZ is reporting Steven Slater has been offered his own reality show. TMZ is claiming reality TV giant Stone Entertainment approached Slater’s lawyer with an offer to make him the newest reality star.

Supposedly the reality TV show would feature Steven Slater helping other peeved off employees quit their jobs with flare. No word on whether or not Slater is interested, but that would make for a pretty entertaining show if it did happen.

While the flight attendant’s actions might seem like a dream come true to many, the antics actually landed him in hot water.

AccessHollywood.com previously reported Slater was free on $2,500 bail after being charged with criminal mischief, reckless endangerment and trespassing. Steven Slater could face up to seven years in prison if convicted.

If you could quit your job any way you liked, what would you do? SheKnows wants to know.