Tila Tequila was attacked by concertgoers while performing at the Gathering of the Juggalos in Illinois. 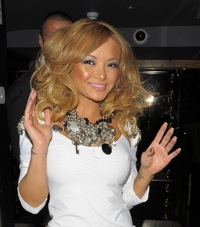 The crowd quickly became hostile when Tila took the stage for her “musical performance” — so much so that she was forced to flee for her life!

“I went onstage and immediately, before I even got on stage, dudes were throwing huge stone rocks in my face, beer bottles that slit my eye open, almost burnt my hair on fire cuz they threw fire crackers on stage, and they even took the (expletive) out of the port-o-potty and threw (expletive) and piss at me when I was onstage.”

Tila Tequila added, “These people were trying to kill me. So then after the last blow to my head with the firecracker they threw at me exploded, my bodyguard and the other security grabbed me and ran as fast as they could to the (expletive) trailer. Since their security sucks, the 2,000 people ran after us, trying to kill me. They almost got me so they finally reach the trailer, blood all over myself, can’t stop bleeding, then all of a sudden, all 2,000 people surround the trailer and bust the windows! Even the guys inside with me were shaking! Their hands were shaking cuz they were so scared! So three guys inside the trailer had to grab a table and push it over the broken windows and grabbed all the chairs they could find to hold the people from outside back. It was scary as hell!”

While Tila is usually full of crap, pictures don’t lie — she sent several of her bloody face to TMZ — and neither do the local police. Sheriff Tom Seiner says “things got out of hand” at the concert and at the time of the attack on Tila, cops were already on the scene because of reports of a stabbing. He said the event was a nightmare, would be happy if it never came back and said he was sure promoters chose the location because the county does not require an event permit.

read on for more tila tequila