Hilary Duff and Mike Comrie were married in a fairytale wedding fit for a princess. 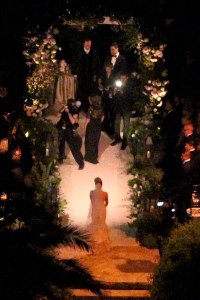 The former Disney star and hockey player Mike Comrie said I do during a sunset ceremony at a $29 million estate near the San Ysidro Ranch in Montecito, California.

One witness described the celebration as: “Absolutely stunning. It was one of the most beautiful weddings I’ve ever seen. They thought of every last detail and it was an incredible sight.”

While the ceremony may have been a short 20 minutes, Hilary Duff made the most of feeling like a beautiful bride. Duff, in a strapless Vera Wang gown, was escorted down a candle-lined and rose petal-laden aisle by her mother. Her older sister, Haylie Duff, stood by her side as maid of honor.

After Mike Comrie popped the question during a Hawaiian getaway in February, Hilary Duff quickly became ready for her big walk down the aisle. “I came home to a big stack of magazines from my family,” Hilary Duff told Us. In her quest for the perfect gown she had “tear sheets all over my house. It’s very exciting!”

Hilary Duff has often said she makes the most of the couple’s long distance relationship and they conquer the issue quite normally. “We both have busy jobs, and we’re both very focused people, so that helps,” Duff explained to Us. “Since we are apart so much, it’s not like one person is at home waiting for the other.”

No word has been given to where the happy couple might be honeymooning.