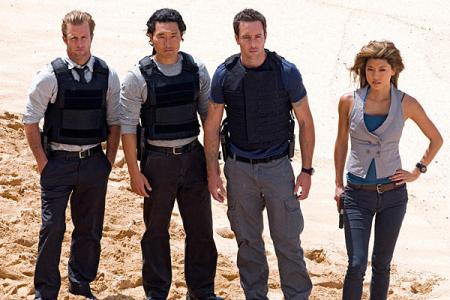 ABC goes gritty with Michael Imperioli’s Detroit 1-8-7, starting September 21, and also has Dana Delaney and Jeri Ryan solving the case and their own problems from the medical examiner’s office in Body of Proof, Fridays this fall. Kelli Giddish, Cole Hauser and Jesse Metcalfe give good Chase in an NBC series about a US Marshals fugitive-apprehension team, beginning Monday, September 20.

In NBC’s Outlaw, Jimmy Smits goes from Supreme Court Justice to lawyer and travels the country to take on important cases starting Wednesday, September 15; then moving to Fridays. Two networks give good law on September 22: Maura Tierney and Rob Morrow duke it out from opposite sides of the courtroom in ABC’s The Whole Truth; while CBS takes on Las Vegas law in The Defenders, with Jerry O’Connell and Jim Belushi.

What about the laughs? Never fear. Not only do some of these dramas offer laughs, but the scripted comedy is back in fashion this season. SheKnows will have the rundown on the new lineup of sitcoms soon. Stay tuned!