The reason for Kelsey Grammer’s divorce has become crystal clear and it’s going to cost him a pretty penny. 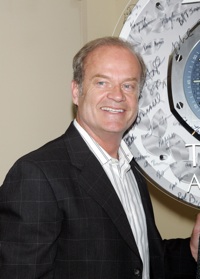 Grammer confirmed to TMZ that his girlfriend Kayte Walsh is knocked up and that he plans to marry his new baby mama. There’s a slight hitch in his plans, though: Kelsey Grammer isn’t even close to being divorced from his current wife Camille Donatacci.

While Kelsey and Camille split earlier this summer, the ink won’t be dry for quite some time due to financial complications — namely that there was no prenup in place and Camille could walk away with at least $30 million of Kelsey’s fortune.

A source explained, “Camille stands to get half of all syndication of Frasier made during the years they were married. That’s seven years of episodes, as well as income from other shows the company made, including Medium and Girlfriends.”

Kelsey Grammer is said to be worth around $85 million. Camille will earn a couple of bucks with her star turn in The Real Housewives of Beverly Hills. Needless to say, if Camille plans on walking with that much cash in hand, Kelsey won’t be offering monthly spousal support.