Ryan Murphy has had quite a career and according to him, his success is equal parts talent and luck. Murphy is not only the director of Eat Pray Love, but also the creator-director of Glee and is the mastermind behind the genre-busting Nip/Tuck.

In our exclusive interview, Ryan Murphy talks about the challenges of bringing a beloved book to the big screen and how Glee‘s brightness came out of Nip/Tuck‘s dark tone.

SheKnows: Julia Roberts’ character certainly goes on a journey through Eat Pray Love with each stop along the way giving her more insight into herself. Did you have a similar journey yourself in making the film? 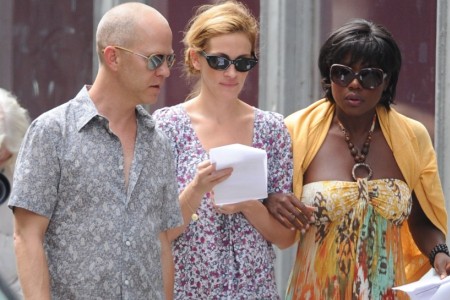 Ryan Murphy: I think in my life, I’m so lucky to do what I do, because I think the things I do change me molecularly. For example, I was doing Nip/Tuck forever and it’s really, really dark. It was oppressive, but that’s what it was about. I didn’t want to think that way anymore. I’d like to be happier. As a reaction to that I did Glee and now I’m really happy. I go home every day with a smile on my face after shooting Glee. I’ve never really had a lot of luck with relationships in my life. Like Liz Gilbert, I tend to lose myself in a relationship in a desperate effort to make it happen. I was in that pattern. I just decided I would rather be by myself. I went through some bad breakups. And then, through the movie, certainly through traveling and learning while making the movie, lo and behold, I feel much more that I appreciate the theme of the movie, which is the search for balance. I met somebody and we’re moving in together. I guess that person is my Javier Bardem [laughs]. But, I felt I could not do what I’m doing in my personal life without having made this movie. It really did affect me and I learned from it.

SheKnows: I wondered because it would be hard for this movie to not affect you.

Ryan Murphy: I cried when Julia did all those big scenes like the Thanksgiving scene, and the scene on the beach with Javier when they fight — it was all very personal to me. And Liz Gilbert knew that, too. When I went to talk to Liz about it, she liked the fact that I felt her life and related to it.

SheKnows: I suppose any filmmaker would feel a bit of pressure adapting a book to the big screen. But Eat Pray Love has such a passionate following, did you have any apprehension making Eat Pray Love? 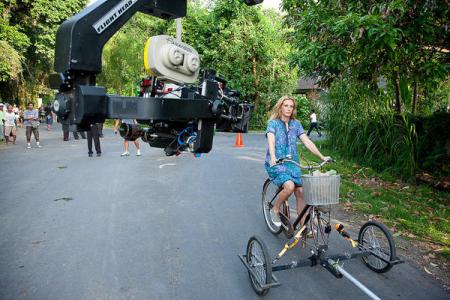 Ryan Murphy: I was really nervous about it, I’ll be honest. When I finished the first draft of the script, I sent it off to Liz Gilbert and we had a conversation. She said, “Here’s the deal with this project. There’s an energy around this thing that is almost like The Giving Tree. You have to embrace it.” Once I talked to her and once I felt I had her blessing, then that took the pressure off. If so many millions of women love the book, if Liz Gilbert sees and loves the movie, who else can I please? I made an effort to include Liz in the creative process. She loved it and now I feel better! I was pacing for that phone call because I knew she had just seen the movie. She loved it.

SheKnows: Your Eat Pray Love cast is nothing less than stellar.

Ryan Murphy: Right! I was so lucky.

SheKnows: What’s that old phrase, there are no small parts? 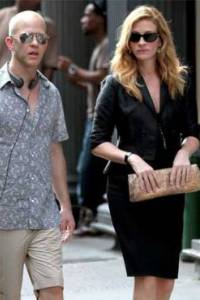 SheKnows: Javier (Bardem) and Billy (Crudup) exemplify that in Eat Pray Love. When each one of these people committed, did you have a pinch yourself moment?

Ryan Murphy: I really did. For the most part, they were all my first choices. I remember Ron Howard told me once, “You never get your first choices.” That’s an industry joke. It almost becomes a wish list. I never in a million years thought that Javier Bardem would do it. I never thought Richard Jenkins would say yes. A lot of the yeses had to do with Julia Roberts. She attracts a certain level of actor. James Franco told me the reason he did the movie is he wanted to kiss Julia Roberts [laughs]. I was humbled by that, but it says a lot about Julia Roberts.

SheKnows: One scene stands out for me, the scene with Richard on the roof in India where he’s pouring his heart out to Julia.

SheKnows: Tell me about the making of that scene, it almost felt like one shot.

Ryan Murphy: That scene is kind of in the book, but it’s not. So I called the real Richard from Texas, I asked him for a story. I needed a personal story there, you have to tell her a story. He said, “Sure,” and boy did he help me out. He told me that story. I wrote that scene with Richard from Texas. That meant a lot to me that he trusted me in that way. Richard Jenkins said that he didn’t want to rehearse it. We got to India, it was his big day. Julia Roberts had a 102-degree fever, she was really sick. I was really sick. I told Julia we didn’t have to shoot that day, but she knew it was Richard’s big scene. So she said, “I’m doing it.” I was behind the monitor shooting the scene. During the first take, which is what is in the movie, he didn’t stumble over a line. He is literally having a nervous breakdown. We shot for another hour. But when I went to the editing room I wondered, “What if we just went with that first take, something really radical?” We’re not letting audiences off the hook because the tension is so high. There are three other dudes in the room, straight guys, and it ended and I was crying. Then, they were all crying. I knew we had to keep it as is, that’s the one.

SheKnows: Lastly, as Eat Pray Love arrives on screens, are you ready for the fan reaction, positive or negative?

Ryan Murphy: So many people have come up to me asking if this line is in the movie, or that line. It’s such a huge book you can’t put everything in there, it’ll be an eight-hour miniseries [laughs]. I did my best. I pleased Liz Gilbert and at the end of the day, that’s all I could hope for.