Dina Lohan sat down with the Today show’s Matt Lauer to discuss Lindsay Lohan’s jail time, rehab and her daughter’s next move. 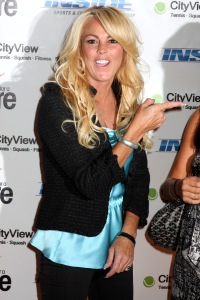 Dina Lohan broke her silence during a tense interview with Matt Lauer on the Today show. Dina Lohan’s famous daughter, Lindsay Lohan, is currently cooling her heels in court-ordered rehab after serving just 13 days of her 90-day jail sentence for skipping court-ordered alcohol education classes. The classes stem from a 2007 DUI, which Dina Lohan says her daughter still pays the price for.

Dina Lohan is not holding back against the judge who put her precious daughter behind bars. When Matt Lauer asked about Lindsay Lohan’s jail time, Dina was quick to point out Judge Marsha Revel recused herself from the case.

“I think she went overboard and played serious hardball with Lindsay,” Dina Lohan said during the strained interview.

Dina Lohan added of her daughter, “She was in for missing a couple of classes that she made up, and she was working at the time. The judge went overboard and put her in serious lockdown for two weeks.”

During that “serious lockdown” time, Dina Lohan claims her daughter was not given special treatment at Lynwood Correctional Facility.

She says Lindsay is doing fine. “She’s great. She’s been through a lot. The judge played hardball. Lindsay was in prison with alleged murderers, and she’s become friends with a lot of them. Lindsay’s rolled with the punches and she’s doing wonderfully. The judge was fired,” Dina Lohan said.

Matt Lauer questioned momma Lohan’s quick need to blame the judge for Lindsay Lohan’s troubles as the interview kept turning to the obvious disappointment in Judge Revel’s decision. When asked about Lindsay’s time in rehab, Dina Lohan insinuated her daughter would be released early.

“Because the judge recused herself. She went against the district attorney’s advice. It will be soon,” Dina Lohan hinted to Matt Lauer.

Things got a bit tense when Matt Lauer insisted Lindsay Lohan had been in rehab four previous times and wondered if it would actually work. Dina Lohan defended her daughter, putting Lauer in his place. Lohan corrected him, saying her daughter has actually only been in rehab twice.

She also went on to say, “I actually put her in rehab the first time. When you say works or not works, I don’t know what works. She was 19 years old. She went to Los Angeles and was a young girl and got in trouble. And I’m certainly not condoning drinking and driving and what she did, but she’s still paying a price for what she did in 2007 to now. It’s the same offense. Nothing has changed.”

Dina Lohan went round and round with Matt Lauer, claiming everything from the judge to tabloid propaganda for the blunders. She did surprisingly admit that Lindsay Lohan got herself into the trouble but that happens. Lindsay’s life is “magnified” and it’s all part of living and growing, Lohan explained.

“As a parent you have to let them go a little bit, and when she went out to Los Angeles when she was 19, I had to let her go and live and fall and fail and survive. Without failure, there’s no success,” Dina Lohan said. “I was there in close proximity, but you can’t make your child not go out and go to a club and not get behind the wheel of a car. I certainly can’t condone her behavior. I put her in rehab.”

When asked if Dina Lohan felt the need to get Lindsay Lohan out of Hollywood once she’s released from rehab, the mother’s answer came quick with no hesitation.

“She’ll be coming back to New York,” Lohan confirmed. Dina Lohan has no ill will toward California but she’s hesitant after the current woes with the court system.

What do you think of Dina Lohan’s plans to take Lindsay Lohan back to New York? We want to know.