So You Think You Can Dance crowned a new season seven champion with a celebration like no other.

It was a long, yet talent-packed road to the season seven finale of So You Think You Can Dance. In the end, it all came down to a gifted contemporary jazz dancer from Phoenix, Arizona. Lauren Froderman beat out Kent Boyd and Robert Roldan for $250,000 and the title of “America’s Favorite Dancer.” 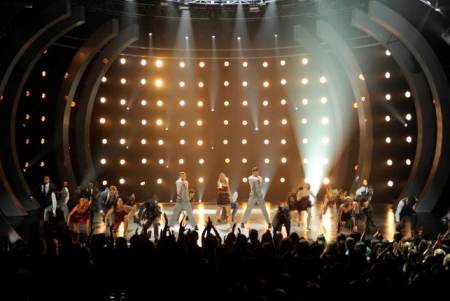 But before host Cat Deeley announced America’s pick, So You Think You Can Dance and its top three put on a finale celebrating the season’s most moving performances and welcomed some very special guests to the stage.

The season finale of So You Think You Can Dance opened with an electric number featuring the season’s top dancers. All of our favorite judges and personalities were there to witness the opening masterpiece. Nigel Lythgoe, Mia Michaels, Kenny Ortega (High School Musical), Tyce Diorio, Adam Shankman, Stacey Tookey and former hot tamale judge Mary Murphy kept the party going with their choices for the favorite routines of the season.

One of the featured numbers chosen by Nigel Lythgoe was Billy Bell’s emotional interpretation of Mad World set to a homeless scene which brought many fans to tears the first time.

Another show-stopper was Tyce Diorio’s choice that featured finalist Robert Roldan. The routine set to the song Scars was conceived by the brilliant choreographers Tabitha and Napoleon D’umo. The dark and twisted circus number proved Robert deserved to be in the top three as the sharp and precise movements were just as fierce this time around.

The first special guest of the night was the dance crew Quest featuring former contestants Ryan and Hawk. This hot and funkadelic number was futuristic with disco-infused moves and acrobatic styling.

As per usual, Nigel Lythgoe promised to tap dance but a convenient injury side-lined the British judge. Instead, a young boy came out and set the stage on fire with a tap number to rival any adult. The Manzari Brothers followed up the young boy’s routine by showing their fancy footwork with a cleverly crafted tap number. 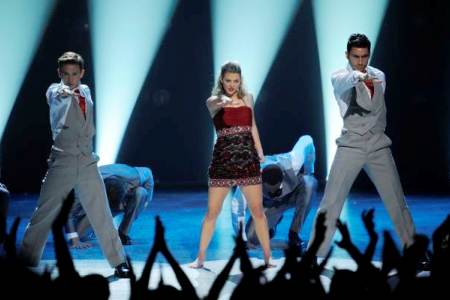 Season six winner Russell Ferguson busted up the stage with So You Think You Can Dance‘s very own Lil’ C. The krump dancer from Boston reminded everyone why he was crowned last season’s champ. Ferguson was ready to pass the torch as he’s itching to get out and tour.

The winner of the UK version of the show, Charlie Bruce, slowed the moment a bit with a Celine Dion number that had a bit too much fog. The fact that the slowest part of the finale was still amazing is a testament to how profound the entire night was from an artistic perspective.

As the festivities drew on, the focus switched to Kent Boyd, Lauren Froderman and Robert Roldan. Cat Deeley put Roldan out of his misery and declared him third place in the fight for the title. This does not diminish anything the young man from Thousand Oaks, California accomplished during his progression on So You Think You Can Dance. Robert Roldan was a class act from the beginning to the end.

Shifting gears, the surprise act of the night took the floor! Ellen DeGeneres in all her dance glory partnered with former contestant, Stephen “Twitch” Boss, to bring the house down. The odd couple performed a hip hop routine to Lil Jon’s, Outta Your Mind. When the dance loving comedian swung from behind a closed door to join Twitch, the entire audience erupted into a thunderous roar. The news might have been leaked earlier in the day but its magnitude wasn’t affected in the slightest — complete brilliance!

Their could only be one winner and it was the little engine that could. Lauren Froderman took down the talent of Kent Boyd to claim the title of “America’s Favorite Dancer.” Not to mention, the newly crowned champ also takes home $250,000.

In the words of Mia Michaels, Kent went from a boy to a man during the season. He is a true artist and deserved to be standing at the end. Lauren went into the finals as the one who should win and she did just that.

Season seven of So You Think You Can Dance was a display of true artistic expression and surpassed any season before it, in my opinion. To put it simply, the finale was breathtaking.

Congratulations, Lauren! You earned it!