Julia Roberts’ latest film Eat Pray Love kicked off with a star-studded premiere on August 10 at the Ziegfeld Theatre in New York. 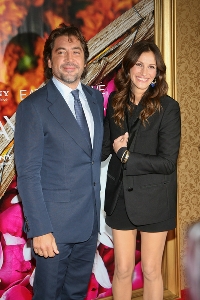 When asked what she got out of shooting the film, about a woman who travels all over the world to find herself, Julia Roberts, clad in a black Stella McCartney jacket and Diane Von Furstenberg shorts, told USA Today, “What I got out of it was realizing that I still really loved acting and working this hard and making this level of commitment.”

Ryan Murphy told USA Today about Eat Pray Love‘s leading lady, what you see is what you get with her. He also added, “She doesn’t like love scenes too much because she’s so in love with her husband.”

Regarding her reported 10 pound weight gain during the shoot, Julia Roberts confessed to SheKnows, “In the scene with the pizza, by the time the scene is over, I’ve eaten the entire piece. When we were in Naples, we started shooting at eight in the morning, and I think by 8:45, I’d eaten eight or ten pieces of pizza.”

The woman who lived the memoir, and gained more than a measly 10 pounds during her journey, Elizabeth Gilbert, marveled to ABCNews.com about her success, “I was not picturing a movie when I was writing this book, and I don’t think I had the audacity to dream of Julia Roberts in it.”