Eat Pray Love has enormous expectations attached to the film’s release. Given that the book is adored by tens of millions, there is a certain amount of pressure on filmmaker Ryan Murphy and star Julia Roberts to get the page to screen treatment right. So, do they? 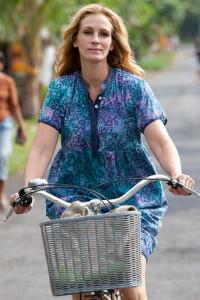 Given the fact that the book Eat Pray Love is mostly in Elizabeth Gilbert’s head, bringing her extraordinary story to the screen is an ambitious undertaking and for the most part, Murphy and Roberts succeed.

As the film commences, Liz (Julia Roberts) is a woman in her 30s who is unhappy in her marriage. In the book, little is known about the husband that Gilbert leaves when she sets off on her inner-outer journey. In the Eat Pray Love movie, the ex-husband, as played by Billy Crudup, is a much more flushed out character whose presence is felt throughout the film.

Once Liz decides to divorce her husband, she continues her life in New York City and immediately lands in the arms of another man (portrayed by James Franco). The man, much younger than she is, provides her no more self-satisfaction than her marriage did. It is here that Roberts’ world-wide trek truly commences.

First, she heads to Italy to indulge in the art of enjoying food again. Before she travels to Italy, Roberts prophetically states to her onscreen BFF, played with panache by Viola Davis, that she wants to have the act of eating be something more than simply providing sustenance.

Director Ryan Murphy triumphs with his Eat Pray Love adaptation in particular in the section that takes place in Italy. Liz befriends some locals, as well as a Scandinavian woman, who in many ways serves as a catalyst to Liz’s self-discovery. 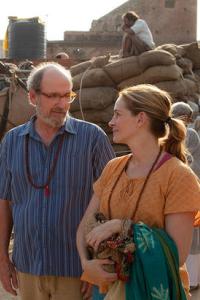 The “Eat” portion of Eat Pray Love is a treasure. The audience completes this journey with Roberts and feels the satisfaction of her soul completely. Then, the movie shifts to India.

For the final two-thirds of the film, the feel is much different than the tone set in Italy. That is on purpose and allows the audience to feel the disruption in a very real sense which mirrors Roberts’ character on screen.

In India, the film drags a bit, as it does in Bali, the final destination. Eat Pray Love feels a little long and probably could have been cut by almost 25 minutes. But, for those enraptured with the book, no length of time could be seen as too much in bringing Elizabeth Gilbert’s memoir to the big screen.

The acting is top notch throughout. Julia Roberts continues her streak of solid performances as she completely gets the Elizabeth Gilbert character, therefore book fans will be thrilled. Billy Crudup is also fantastic in the role that was essentially non-existent in the book. James Franco and Javier Bardem as Roberts’ love interests are both solid, although Bardem’s Brazilian accent is closer to his own Spanish one than that of the Brazilian character he portrays.

Of all the men in Julia Roberts’ Eat Pray Love world, the actor who steals the show is Oscar-nominee Richard Jenkins. His character is compelling, compassionate and provides more heart than any other character in the film (just as he does in the book, too). Jenkins always turns in stellar work, but in Eat Pray Love, this veteran actor may have his best performance ever.