We all know it’s not safe to text and drive or even drunk text for that matter. Now add a new one to the list. Never text from a movie premiere. Especially if you’re Ryan Murphy telling Jane Lynch she’s hosting Saturday Night Live. 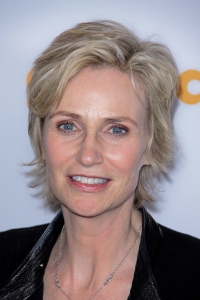 It is true that Jane Lynch will host Saturday Night Live in October, but how she found out is the kicker.

During the New York premiere of Eat Pray Love, Ryan Murphy told The Hollywood Reporter, “Saturday Night Live called to say: Would you give us Jane for a week in October? We just don’t do that, but for Lorne Michaels, I said yes.”

Ryan Murphy said he then texted Jane Lynch of the news. “I said: Lady, you’re doing Saturday Night Live. And she literally wrote back: What are you talking about?”

Jane Lynch, who made Glee’s witty and sarcastic cheerleading coach, Sue Sylvester, a household name, is up for an Emmy in August.

Glee itself has been running rapid with the release of guest star cameos like John Stamos and most recently announcing a Britney Spears Glee episode. Gleeks get ready because Glee is returning for its second season September 21.