Fantasia Barrino was rushed to a North Carolina hospital after an apparent overdose and we can now confirm the singer is resting comfortably. 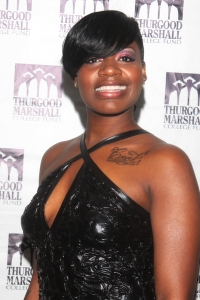 Fantasia Barrino was rushed to a North Carolina hospital August 9 after an apparent drug overdose.

Barrino’s father, who lives in Greensboro, North Carolina, is speaking out for the first time about his daughter’s condition. “She’s doing fine,” Joseph Barrino assured RadarOnline.com.

Fantasia Barrino’s manager, Brian Dickens, is also weighing in on her recovery. “Her injuries are not life threatening. She was dehydrated and exhausted at the time,” Dickens explained to UsMagazine.com.

“Fantasia is stable now. She will be released from the hospital soon,” Dickens went on. “Fantasia is a fighter and a survivor. This is not the hardest thing Fantasia has endured. Fantasia will be stronger, smarter, and better for it. Her work has always inspired her and served as a source of strength.”

Perhaps the “hardest thing” Brian Dickens is referring to is the sex tape scandal surrounding Fantasia Barrino. The season 3 American Idol winner is supposedly featured in a sex tape with a married man named Antwaun Cook. The sex tape is the supposed catalyst that allegedly caused Antwaun’s wife, Paula, to file divorce papers.

Just before Fantasia Barrino landed in the hospital, Dickens addressed the gossip and the relationship between the two.

Brian Dickens went on to admit, “Fantasia and Mr Cook dated on and off for about eleven months. Fantasia believed Mr Cook when he told her he was not happy in his marriage and his heart was not in it… Fantasia fell in love with Mr Cook and believed that he loved her.”

Now is not the best time for the talented singer to lose it. Her latest album, Back to Me, is reported to drop August 24 and the latest scandal and overdose might not help.

Stay tuned for more on the latest in the life of Fantasia Barrino.