Looks like Jersey Shore‘s got a situation brewing and we don’t mean the fist pumping guido of the same nickname. Our favorite tanorexic Snooki isn’t pleased President Barack Obama is denying he knows who she is. 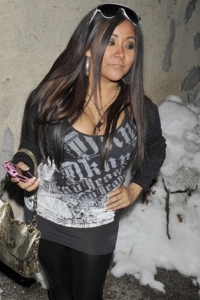 During a recent interview on The View, Joy Behar asked President Barack Obama if Snooki should run for mayor of Wasilla. Obama responded, “I got to admit, I don’t know who Snooki is.”

Now, Snooki, the little guidette that made the hair bump famous, is firing back. She is claiming that Barack Obama knows exactly who she is.

“I know he knows who I am,” Snooki told E! News. “Why did he have to lie and say he didn’t know me? He did say Snooki and JWoww about the tanning stuff and now he doesn’t know who I am? He has to stop lying.” Snooki did not just call the leader of the free world a liar.

The “tanning stuff” Snooki is referring to is the tanning tax bill President Barack Obama joked about during the annual White House Correspondents’ Dinner back in May.

“The following individuals shall be excluded from the indoor tanning tax within this bill: Snooki, JWoww, The Situation and House minority leader John Boehner,” Obama kidded at the dinner.

Snooki may be part of a reality program America loves to make fun of, but the Jersey Shore starlet tried to make her point on the premiere of Jersey Shore. She started off fine, but good old Snooki came through at the last minute.

She added, “Because he’s pale and would probably want to tan.” There’s the Snooki we know and love.

Snooki in a war of words with President Barack Obama. This can’t be good.

I bet he’s sitting in the Oval Office asking himself who this girl is who thinks he knows her. The guy admittedly has someone Twittering for him, so it’s completely possible he doesn’t know who she is or what he was saying at the Correspondents’ Dinner.

I don’t think he’s concerned with Snooki’s hurt feelings. That’s just an opinion. What’s yours? Tell us in the SheKnows comments section.