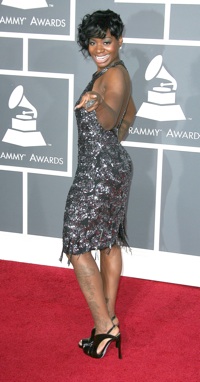 According to the American Idol singer’s rep, Fantasia swallowed a fistful of aspirin and a sleep aid because she felt “overwhelmed by the lawsuit and the media attention” surrounding her married boyfriend Antwaun Cook, his wife and a sex tape.

Paula Cook filed a child support claim against her estranged husband Antwaun Cook alleging a “covert adulterous affair” between the two lasting nearly a year. Paula also claims the two made the world’s worst celebrity sex tape, saying in court papers, “Throughout the course of their adulterous affair… Defendant/Husband and Ms. Barrino have at times recorded their illicit activity.”

Fantasia has repeatedly denied rumors of an affair between her and Antwaun, but after what’s now elapsed that seems far from the truth.

On Monday night, cops received a 911 call to Fantasia’s North Carolina home and listed her situation as a suicide attempt. She was brought to the hospital in serious condition.

“Fantasia has always been an open book. Honesty, self-respect, and personal responsibility are values she wears proudly.

Fantasia read Mrs Cook’s Complaint against Mr Cook for the first time yesterday. She knows some of the allegations in Mrs Cook’s complaint are totally false. There are others she strongly doubts. There is plenty she does not know.

Fantasia is heartbroken and is sorry for any pain she may have caused. ??Yesterday, she was totally overwhelmed by the lawsuit and the media attention. Last night, Fantasia was hospitalized. She took an overdose of aspirin and a sleep aid.

Her injuries are not life threatening. She was dehydrated and exhausted at the time. Fantasia is stable now. She will be released from the hospital soon. Fantasia is a fighter and a survivor. This is not the hardest thing Fantasia has endured.

Fantasia will be stronger, smarter, and better for it. Her work has always inspired her and served as a source of strength. Her new album, Back To Me, will be released on August 24.?The lyrics to I’m Here say it best:

Fantasia sends her praise to God and her eternal gratitude to her fans, friends, and family. God is good.”

Fantasia is expected to make a full recovery.