Both ladies are in love with nerdy but cute Scott Pilgrim (Michael Cera), who plays in a band and ends up fighting all seven of Ramona’s “evil exes” while trying to let Knives down easy. 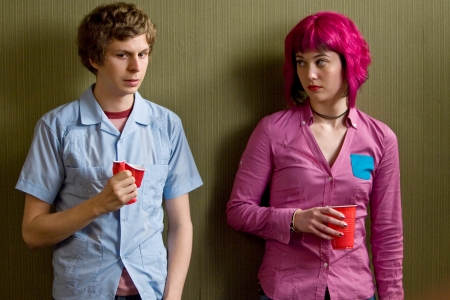 We’re interviewing Mary and Ellen on the lot at Universal Studios in LA for Scott Pilgrim vs The World and it’s a really candid and fun girl chat. Ellen admits that, during a martial arts fight, she actually cut Mary’s face, and Mary is okay with it. Both girls worked amazingly hard on training and executing all the stunt-heavy action and the ladies say they loved their fashion-forward style in the fantasy-action film. Both girls are spilling their favorite Michael Cera moments from the set as well!

Picture Mary looking the polar opposite of her character Ramona, she’s wearing her dark brown hair up in well-ordered curls lying flat and ever so perfectly placed on the back of her head. She’s in a slim green dress topped by a red sweater and wearing very high heels. Ellen is bridging the two looks she has on screen with a casual, modern and cute outfit somewhere in between school girl uniform and kick-butt leather action queen. It’s dishing time for one of the most talked about summer movies of the season.

SheKnows: You girls really get to kick butt in this film.

SheKnows: How much fun was that?

Both: It was so much fun.

Ellen Wong: Going through it, Mary and I weren’t like, “Oh yeah, we’re going to play these female characters who kick ass.” It was more like we were really concentrating on the circumstances of each individual. Girls like this exist and it’s neat to see females in these sort of roles where they’re equal to their male counterparts. It’s neat to see that they can be so strong. It’s cool.

Mary Elizabeth Winstead: Absolutely. I think when we walked on set and saw how many talented, funny, interesting, strong girls there were in this film, it was great. It was great to be not only playing such a cool character and to be playing somebody so strong and interesting, but to have so many female characters in one movie who represent so many different types of strong women was really exciting. I found so many more women to admire in my own life, which is inspiring and cool and I felt so lucky to have been a part of that.

SheKnows: Ramona has seven evil exes who Scott Pilgrim has to fight. Did either of you have any evil exes who reappeared to complicate your life or give the current boyfriend problems? 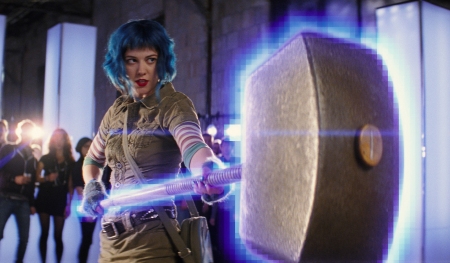 Mary Elizabeth Winstead: [Smiles] Oh, I’ve had a couple of pestering, past individuals who’ve kind of come around. Certainly no fist fights or anything like that but little annoyances here and there, I would say.

Ellen Wong: I’ve been asked that question and feel like I’m so boring because I don’t have anything like that. I don’t know, but I’ll give you a shout if it does happen.

The ladies get the look

SheKnows: Ellen, your look in the movie changes and Mary, you change your hair, but did you like the look or keep anything from the wardrobe?

Ellen Wong: I got to keep some of the clothes from my wardrobe but that was because there was this little joke in the costume department that my look was really boring. I was always wearing a hoodie and jeans on the set so they gave me some of Knives’ clothes and said, “Try to wear some of this.” I cut off twelve inches of my hair for the role and also wore a wig, so I definitely went through a lot of different changes. The look of the character coincides with what she’s feeling on the inside too. You see so much change in her and that’s pretty much what she’s going through on the inside too; trying to figure out where she fits in, what works, what doesn’t.

Mary Elizabeth Winstead: I loved it all. I loved the way that it helped me become a different person. I didn’t really take anything from Ramona’s wardrobe because I couldn’t really imagine actually using any of it in my own life because I’m so different from Ramona in the way that I look and dress. But it was fantastic as far as getting into character. It made a huge difference for me.

SheKnows: At Comic-Con, was it surreal to see people dressed up as your character Ramona?

Mary Elizabeth Winstead: Yes! It was very surreal. I took photos with a bunch of Ramonas. They even had hammers that were exact replicas of what I used in the movie. It was pretty amazing. I think we were all pretty overwhelmed by the whole experience, just seeing the fans there and feeling that excitement and their genuine passion and love for these books. Then hearing their cheers and laughter when they watched the film, it was like “Wow! We really got it right,” because these are the harshest critics if you got it wrong. They really reacted to it in the most positive way I could imagine.

SheKnows: Did you also notice the number of girls who had real Ramona haircuts wandering around Comic-Con?

Mary Elizabeth Winstead: Oh, like their own hair? Oh yeah.

SheKnows: Were you like, “Right on!” or was it a little bit creepy?

Mary Elizabeth Winstead: Oh, I think it’s cool. I actually got a haircut to match Ramona’s when I got the part. I sort of cut my hair in that style to get into character even though I was wearing wigs through the whole thing. It’s fun. It’s cool. I think that goes to show how representative it is of a generation. That’s what they want to look like and not to emulate the movie necessarily, but because it’s a cool haircut. I think it goes to show how Bryan (Lee O’Malley, the comic creator) really got it right.

SheKnows: How did you get the part, Ellen? 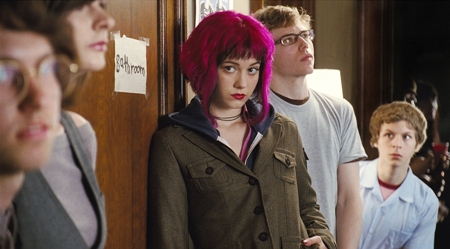 Ellen Wong: My agent called me and said, “Hey there’s this really great role.” I had this little paragraph of lines for Knives Chow and I had to put myself on tape pretty much in just a few hours, so I sent in a tape. I went and got all the books and got really into it and was like, “I shouldn’t have done that because I really want this role and if I don’t get it, I’m gonna be really sad.” I did several callbacks and a fight test and I got to meet the stunt team. I flew to LA and did a screen test with Michael Cera. This is all over about six months of my life, then I got the part.

Mary Elizabeth Winstead: Ironically enough it was offered to me, which is ridiculous. That’s very rarely happened to me in the past, even for small little supporting roles. I’d have to go in five times and then not get the part. So I certainly was shocked that a film like this would be offered to me, but I think it’s a testament to [director] Edgar [Wright’s] imagination, the fact that he saw me in Death Proof and he said, “That’s Ramona.” He knew it because he trusts his gut enough to know that I could pull it off, so it’s all thanks to him.

SheKnows: Your characters are both in love with Scott Pilgrim. Can each of you give us a Michael Cera moment, whether it’s funny or endearing?

Ellen Wong: Oh, there’s so many moments with Michael. This was my first film and I was so nervous. On the first day, the first scene I shot was where Knives was at the door meeting Scott’s bandmates for the first time. I was so scared and so was she in that moment. Here I am, by myself behind this door and Michael opens the door with “You promise to be good?” and I deliver my line. He closes the door, “Cut.” Michael opens up the door, peeks his head out and goes, “Ellen, you’re doing a really good job. Keep it up.” And that just goes to show you what a genuinely nice guy and sincere guy he is.

Mary Elizabeth Winstead: I have a lot of moments like that as well. He’s so sweet and genuine and after spending a few days with him you just love him. His sense of humor is sometimes really kind of subversive and he kind of messes with you a little bit. It took me a while to figure that out. It’s not in a way that’s out and out funny. Sometimes he likes to just needle in there.

SheKnows: What did he do?

Mary Elizabeth Winstead: I remember one of the first days that we were training, I was just trying to make conversation and the whole thing with Rihanna and Chris Brown had just happened. I was like, “Michael, did you hear what happened with Rihanna and Chris Brown? Is this crazy?” And he was like, “Who are these people? I don’t know what you’re referring to. Brianna? Is she a musician of some sort?” Then, I said, “Oh my gosh, you don’t know who they are? I feel stupid. Rihanna and Chris Brown…” and I was explaining who they were and two days later I said, “He knows who they are. He was messing with me.” It was constantly stuff like that in really subtle ways that I eventually sort of figured out. He was always doing stuff like that.

Ellen Wong: He could walk up to you and say stuff like, “I’m half Chinese” and you’d be like…

Up next…Mary and Ellen dish the relationships at the heart of Scott Pilgrim vs The World and what’s next for the two starlets.