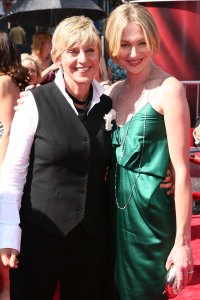 De Rossi, 37, filed a petition at LA Superior Court on Friday to change her last name to DeGeneres in a touching display that is both adorably old fashioned (a wife taking her spouse’s name) and totally today (the couple in question being same sex).

Following last week’s news that Prop 8 would be overturned, making gay marriage legal in the state of California once again, Portia was able to state the reason she was changing her last name as: “Petitioner is taking the last name of her spouse.”

That brings a lump to our throat and a tear to our eye. We’ll never understand the rationale behind trying to keep two people who love each other apart, whether they’re gay, straight, interracial or any other combination. Love should be celebrated, not persecuted.

Ellen DeGeneres and Portia De Rossi were married on August 16, 2008, when gay marriage was first legalized, in front of thirty guests at their Beverly Hills estate. The couple both wore Zac Posen with Portia opting for a princess ballgown and Ellen DeGeneres, 52, in an all-white suit, before they exchanged rings designed by Neil Lane.

A court date of September 23, 2010 has been set for a hearing of the case. We hope that day goes something like this:

The Court: Miss de Rossi, would you like to legally change your name?

The Court: Done and done.