Kim Kardashian and Justin Bieber get up close and personal in Elle.

Kim Kardashian and Justin Bieber made quite the stir when paparazzi snapped revealing pictures of the duo holding hands in the Bahamas a few months back. After innocently tweeting Bieber was her new boyfriend, Kardashian started receiving death threats from obsessed Bieber Fever fans. The whole incident got blown way out of proportion. 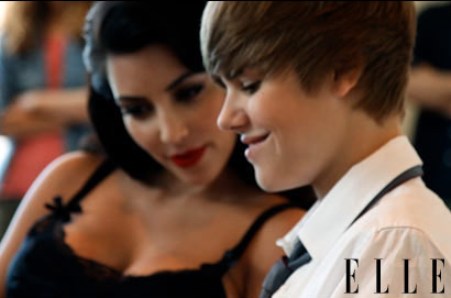 Fans of Justin Bieber can now rest easy and Kim Kardashian can stop sleeping with one eye open. It was revealed the photos were actually part of an Elle shoot based off of the film, The Graduate.

Kim Kardashian took to her blog to let us in on the news. “Remember those paparazzi pics of me and Justin Bieber in the Bahamas!? Well, I can now reveal we were shooting for Elle magazine,” Kardashian wrote.

Some of the pictures shot for the new issue of Elle might leave readers in shock. In one particular shot, reports say Kim Kardashian, 29, donned lingerie while Justin Bieber, 16, took her photo. In another shot, Kardashian and Bieber relaxed on lounge chairs while texting and playing with an iPad.

Kim Kardashian couldn’t contain her fondness for how the pictures turned out, despite being the target of teenage girls everywhere. “Justin and I had so much fun working together on the shoot,” Kardashian wrote.

Justin Bieber, for one, has caught the eye of Hollywood veterans twice his age and many claim this is just the start for the singer, dancer, and now actor, thanks to Bieber’s fall debut on CSI.

Elle shoot or no Elle shoot, Kim and Justin had us going, didn’t they?