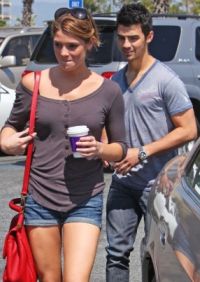 Joe Jonas, 20, and Ashley Greene, 23, raised eyebrows after they struck a pose on the red carpet together at the UK premiere of The Twilight Saga: Eclipse last month. After a round of denials, they were snapped together again, this time doing coffee in Studio City, California.

Could it be love between Joe Jonas and Ashley Greene?

The rumors first started swirling after Greene and Jonas took on London together.

They were spotted at that premiere after sharing a romantic dinner at The Ivy and took in a Kings of Leon concert together, but the pair quickly shot down any talk of dating.

Greene’s rep insisted “they’re friends,” while sources tied the young Twilight vampire to Brock Kelly, who she was snapped smooching with in June.

Greene, who has been paired in the past with Gossip Girl‘s Chace Crawford and Kings Of Leon’s Jared Followill, was even painted as a “man eater.”

“Joe has been trying to date Ashley for awhile now, but it looks like it’s never going to work out for him,” said a source.

This new LA sighting has sparked another round of chatter, but could just be a case of busy pals taking respite from the Hollywood hustle to gossip over coffee.

Greene has been busy on the set of LOL, with costar Miley Cyrus; while Jonas has been uber busy since his breakup with Demi Lovato. In addition to the Camp Rock 2 tour with his Jonas Brothers band and ex-girlfriend Demi Lovato, Joe is also shooting the series Jonas LA. Joe Jonas also recently shot an upcoming episode of TV Land’s smash hit Hot in Cleveland, which airs tomorrow, August 11.

Do you think this is a case of pals caught hanging out or do you sense it’s a new romance in bloom?