Jeff Gordon and wife Ingrid Vandebosch are the proud parents of a new bouncing baby boy. 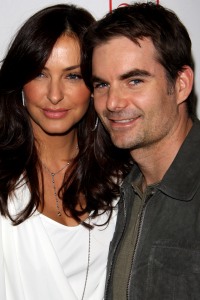 A statement on Jeff Gordon’s website confirmed the joyous arrival.

“Earlier today, Jeff Gordon and Ingrid Vandebosch welcomed a new son into the world. Leo Benjamin Gordon was born at 8:53 am, weighed 7 pounds, 2 ounces and was 19 inches long,” said the statement of little Leo’s debut into the world.

The duo now have one of each — a little boy and a little girl. Jeff Gordon and his wife are already parents to 3-year-old Ella Sofia.

The couple married in 2006 in Mexico.

Jeff Gordon’s littlest speedster isn’t letting that slow him down on the track. Gordon is slated to race in the NASCAR Sprint Cup Series at the Michigan International Speedway later in the week.

Wonder what his wife thinks of that. Something tells me Jeff Gordon will make this the fastest race of his life, so he can get home to his new baby.