Jennifer Aniston and Jason Bateman already have two movies in the works including The Switch. They’re ready to team up again for the film version of Arrested Development, so it seems. 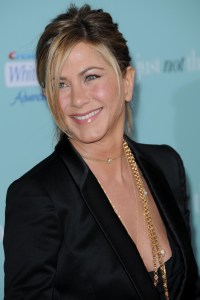 The TV big screen adaptation of Arrested Development is looking more like a sure thing and Jennifer Aniston is a hopeful addition. Or, is she?

There has been chatter about a big screen version of Arrested Development since the quirky show went off the air in 2006. Of late in particular, there’s been word that Arrested Development creator Mitch Hurwitz is working on a script and Will Arnett even predicted the movie would hit production this year.

This weekend, David Cross also chimed in on the topic, offering a rather vague promise at the TCA on August 6.

“I have no idea if there is going to be a movie, but everyone is up for it,” David Cross said. “We’re all up for it. I can tell you I’ve talked to every single person, except for two, but everyone’s into it, and we’re just sort of waiting on a script and hoping it happens. We all want it to happen.”

Now, Jason Bateman and Jennifer Aniston are talking about getting the Friends alum into the picture, although the duo could be kidding.

Jennifer Aniston and Jason Bateman currently have the semen swap rom-com The Switch ready to hit theaters on August 20 and the dark comedy Horrible Bosses in production.

Jason Bateman actually has an Arrested Development role in mind for Jennifer Aniston — which means the rumored script must have some shape already! But, the always hilarious Bateman may in fact have been joking with the press at The Switch press conference held August 9.

Though he’s confident the flick’s a go, Bateman insists it will take more than just the name of Jennifer Aniston to get onto the Arrested Development call sheet.

“There are no offers on this one. She’s gonna have to sing for her supper,” Bateman said. “Hopefully, the guy who’s in charge will like her for that part, because I’m going to suggest her.”

As for Aniston, it turns out she is more than game to sign onto the project. “Anything to work with Jason,” she gushed to MTV.

It’s hard to imagine anyone saying no to Aniston, but assuming she makes the cut, the real issue could be timing. “We’ll see if she’s available,” Bateman said. “She’s busy. She’s pretty famous. I don’t know if you’ve heard of her.”

Then again, Bateman, the master of sly humor, could be making the entire thing up. What do you think?

In fact, Jason Bateman just tweeted moments ago of his comments to the press:

“Why do reporters reach so hard for a headline? I was just thinking out loud during an interview about Aniston being in the AD movie.”