Brody Jenner’s love for Avril Lavigne runs deep, so deep that Jenner, the former star of The Hills, couldn’t resist showing the world by shaving an “A” into his hair. 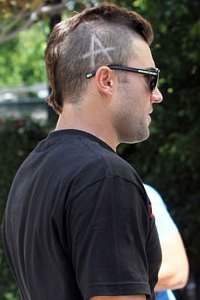 Brody Jenner recently debuted his inner rocker by sporting a new Mohawk. Reports are now saying Brody Jenner vamped up the new look by shaving the letter A into the right side of his head.

Brody Jenner and Avril Lavigne have reportedly been going strong since the spring and what better way to prove his devotion to the punk-pop-princess?

Brody Jenner hasn’t confirmed the act of devotion is in honor of Avril Lavigne, but this isn’t the first time the love struck puppy has allegedly done something crazy for his main squeeze.

Brody Jenner reportedly inked his forearm with Lavigne’s name back in July.

Brody Jenner’s relationships were often the subject of the last few seasons of The Hills. His on-again-off-again relationship with former Playboy Playmate Jayde Nicole was scrutinized by his Hills castmate, and ex, Kristin Cavallari.

“It seems like in today’s society, getting tattoos and piercings, changing the hairstyles, going pink and purple and all that, it seems to be their generation,” Bruce told UsMagazine.com. “But hair can grow back! He’ll be fine.”

Does Brody Jenner’s new do get an “A” according to you? Tell SheKnows, we want to know.