Will Ferrell and The Other Guys turned Leonardo DiCaprio’s box office dream into a living nightmare. 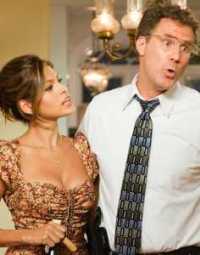 Leonardo DiCaprio’s Inception reigned supreme at the box office for three weeks but was knocked off its pedestal by Will Ferrell’s The Other Guys.

The Other Guys starring Will Ferrell, Eva Mendes and Mark Wahlberg reportedly raked in a stellar $35.6 million on its opening weekend, knocking Inception’s $18.6 million to the number two spot.

Funnyman Will Ferrell isn’t quite used to the top spot of late, especially when it comes to box office big shots like Leonardo DiCaprio. In fact, at the New York premiere of The Other Guys the actor told UsMagazine.com, “I feel like I’m constantly the other guy. I’m always bumped off flights. I never get reservations to fancy restaurants.”

The third film in the Step Up franchise, Step Up 3D, danced its way to the number three spot with $15.5 million, Angelina Jolie’s Salt brought in a respectable $11.1 million clinching the number four spot and Steve Carrell’s Dinner for Schmucks brought home the number five spot with $10.5 million.

Read on for more The Other Guys