Rod Stewart is quite the love machine. The 65-year-old rocker is welcoming his seventh child with wife Penny Lancaster. 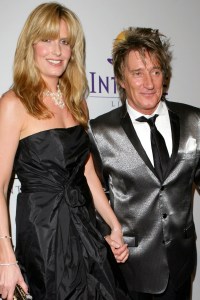 Rod Stewart and Penny Lancaster announced the surprising baby news in a joint statement Monday. The couple, who recently celebrated their third wedding anniversary, couldn’t be happier about their new bundle of joy.

Rod Stewart and Penny Lancaster, 39, have been joined at the hip for the past decade and share a 4-year-old son, Alastair.

The couple couldn’t wait to share the news with their son and said they were “thrilled and delighted to be able to tell Alastair that he was going to be the big brother to a little baby, expected just before Mummy’s 40th birthday.”

The 65-year-old Rod Stewart has 5 children from past relationships. Those children include Kimberly and Sean Stewart with Alana Hamilton and Ruby with Kelly Emberg. Of course, we couldn’t forget about the famous relationship with Rachel Hunter that produced children Renee and Liam.

Rod Stewart and Penny Lancaster are sure to have their hands full with this new little rocker.