Sean Penn and former Fugees’ bandmate Pras have spoken out against Wyclef Jean’s bid for president of Haiti. 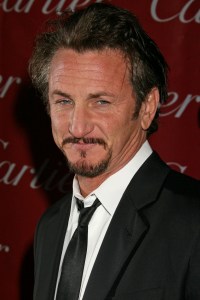 “People say: Are you running for president?” candidate Wyclef Jean said. “I say no, I am naturally being drafted by my country to serve my country.”

Sean Penn, who has spent several months on the ground in earthquake-stricken Haiti, isn’t so sure that’s the case.

Penn took his concerns to CNN. “Right now, I worry that this is a campaign that is more about a vision of flying around the world talking to people: It’s certainly not about the youth drafting him,” Sean Penn said. “I would be quite sure that this was an influence of corporations here in the United States and private individuals that may well have capitalized on his will to see himself flying around the world doing that.”

In a backhanded jab, Sean Penn actually opened by saying he was “not accusing” Wyclef of being an opportunist. He then expressed his suspicions about the Haitian-born musician’s angle.

“I’m very suspicious of it, simply because he, as an ambassador-at-large, has been virtually silent. For those of us in Haiti, he has been a non-presence,” Penn said.

“One of the reasons I don’t know much about Wyclef Jean is I haven’t seen or heard anything in these last six months that I’ve been in Haiti,” Penn also said. “I think he’s an important voice, I hope he doesn’t sacrifice that voice by taking the eye off the very devastating realities off the ground and the very different strategic future it’s got in putting itself back together.”

Penn wasn’t any more impressed with Wyclef’s behavior when he was in Haiti shortly after the quake.

“I want to see someone who’s really, really willing to sacrifice for their country and not just someone who I personally saw with a vulgar entourage of vehicles that demonstrated a wealth in Haiti that, in context, I felt, a very obscene demonstration,” Sean Penn said.

He then called into question Wyclef’s financial goals and insisted more attention must be given to investigating his financial history. Wyclef has been accused of skimming $400,000 of the Yele Haiti foundation’s relief fund for his own use and word is the rapper has also been hit with three IRS liens totaling $2.1 million for unpaid taxes.

Wyclef’s former bandmate Pras has also spoken out, releasing the statement, “I endorse Michel Martell as the next president of Haiti because he is the most competent candidate for the job.”

Wyclef’s bid for President of Haiti is certainly unorthodox, so it’s no surprise people are speaking out. He’s also certain to face more negative attention as the vetting and critique continues.

Leave a comment to let us know what you think of his candidacy.