Pretty Little Liars stars four beautiful and unique friends (Lucy Hale, Troian Bellisario, Ashley Benson and Shay Mitchell) who are faced with the mysterious disappearance of their group’s leader Alison. The plot thickens when Alison’s body is found and the fab four receive ominous and threatening texts from someone called “A.” And perhaps these four young ladies know more than they are sharing on the screen. 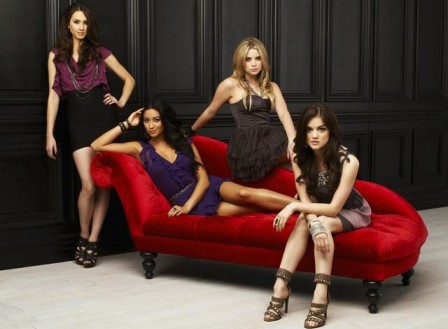 Amongst all this intrigue the girls must navigate confusing relationships, parents splitting, money problems, peer pressure, hot teachers, sex, drugs and everything else teenagers face.

Pretty Little Liars, based on the Pretty Little Liars book series by Sara Shepard, is addictive from the first haunting notes of its theme song Secret by The Pierces. On Tuesday, August 10, Pretty Little Liars will go out with a bang on its summer finale episode, Keep Your Friends Close, about glamping. What is glamping you ask? Glamping is the delightful combination of glamour and camping, in other words, mini-makeovers in the great outdoors. The girls are invited to celebrate Mona’s birthday and are also told by “A” that she will be there too. 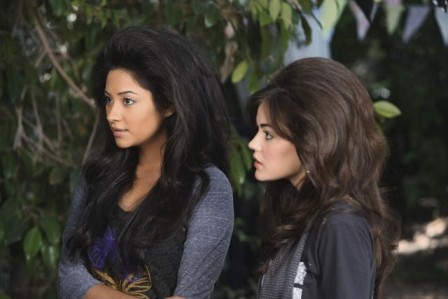 SheKnows met the four stars at a spa in Santa Monica, where they were just as lovely and personable as they are on the small screen.

SheKnows: Pretty Little Liars has been so successful this summer, what kind of ride has it been?

Lucy Hale: It’s new for all us, I think, starting a new show, all the nerves and excitement about being involved with something great, just going through the success of it all. We just got nominated for a Teen Choice Award. It’s just new experiences and we’re sharing it with lots of great people, so it’s fun.

SheKnows: At the Teen Choice Awards, who are you excited to see?

Lucy Hale: I’m excited to see the fans of Twilight freaking out because I’ve never experienced it firsthand.

Troian Bellisario: What about the fans of Justin Bieber?

SheKnows: Lucy, your parents are played by Chad Lowe and Holly Marie Combs, have you learned anything from them?

Lucy Hale: They’ve done a lot and they’ve been around for a while. It’s just really cool to see people that have had so much success and still be genuine and still love what they do. I can sit down and have conversations with them. They’ve put out effort to try to get to know me as a person. They’ve just been very sweet and give good advice. It’s fun and I couldn’t ask for better onscreen parents. 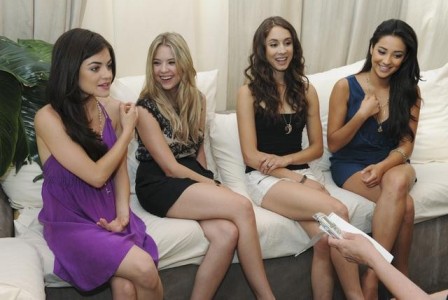 SheKnows: In the flashbacks we always see Alison pressuring you to do things you don’t want to do. How do you think Pretty Little Liars portrays peer pressure? Is it pretty accurate to real life and what you’ve experienced?

Ashley Benson: I think there’s an Alison in every group. There’s always that one person who thinks she can control everyone and she kind of threatens you if you don’t do what she says. Maybe not to that extreme, but people definitely go through people making them do risky things.

Troian Bellisario: It’s hard because certain people grow up faster than other people. I think it’s a really insecure time. It can be a very insecure time in anybody’s life and if you have one person who’s just a little bit more confident or has grown up a little bit faster, you kind of look to that person and you’re in awe. I think Ali was that to all of us. We were in love with her and we were afraid of her and we hated her. We just wanted to be friends with her and we just wanted to be her favorite person in the world. When you have that relationship with somebody, they can use it against you. 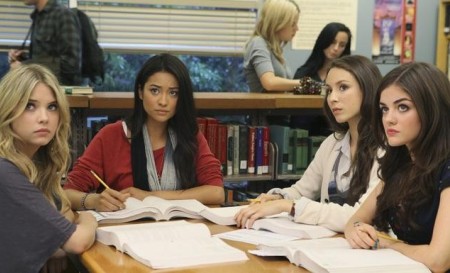 SheKnows: Pretty Little Liars tackles some very tough issues like Emily and Maya’s relationship, drugs, etc. How does it feel to be on a show that faces those issues head on?

Troian Bellisario: I couldn’t be more proud. I don’t know what I would do if I was on a show that avoided them.

Lucy Hale: There are so many shows that act like life is a festival. I think it’s awesome that we’re not afraid to talk about these things, because teens want to hear about this and watch it. I think that’s why it’s doing well and we’re proud of it.

SheKnows: What is it about Pretty Little Liars that is so addictive?

Ashley Benson: It’s the mystery of it all. The writers really push it to the next level every episode and every episode gets better so you have to tune in.

Shay Mitchell: I think, too, we all have such different relationships with so many different people that you want to see how they go.

Watch a preview of the Pretty Little Liars summer finale!