Amy Poehler and Will Arnett have become the proud parents of a second baby boy! 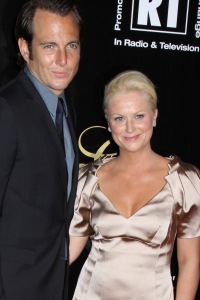 A spokesman for Amy Poehler and Will Arnett announced the arrival of their new son, Abel James Arnett, early Friday morning. Abel weighed 7 pounds, 13 ounces and the whole family is “healthy and resting comfortably.”

Can you imagine growing up with Amy and Will as your parents? They get to enjoy play dates with Tina Fey and her daughter, Alice, kick it at 30 Rockefeller with Lorne Michaels and have Will Ferrell as a godfather — we wouldn’t be surprised if Abel’s first words were “Spit take.”

Will Arnett and Amy Poehler began dating in 2000. They must have known they were meant to be because Will moved to New York in 2001 when Amy was cast on Saturday Night Live.

They married on August 29, 2003 and quickly became a comedy super duo. Amy appeared in four episodes of Arrested Development in 2004 and 2005, playing a woman Will’s character GOB marries during a drunken night of dares. They’ve also starred together in the films Blades of Glory, Horton Hears a Who!, Spring Breakdown and Monsters vs Aliens.

We’ll next see the pair on the Emmy’s red carpet at the end of this month. Amy Poehler is nominated for her starring role on Parks and Recreation and Will Arnett got the nod for his guest appearance on 30 Rock.

Congratulations to the happy family!

25 mins ago
by Alicia Kort