The kids turned young adults of Harry Potter are bringing the wildly popular JK Rowling franchise to an end and some are shedding more than their onscreen identities that made them famous. Take a look at star Emma Watson’s brand new — and very different — pixie haircut! 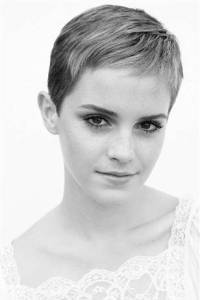 It makes sense that Emma Watson would want to be known for more than her role as Hermione Granger in the Harry Potter movies. She’s heading into her sophomore year at Brown University and has been taking on more of an adult attitude.

So what did she do to let go of the Hermione Granger image after wrapping the movie’s final Harry Potter film? Why, she chopped off those famous wavy locks, of course.

Emma Watson displayed a new pixie cut on her Facebook page. The star posted a picture as well as a blurb about the new haircut. “Dear all. Cut my hair off a few days ago. Feels incredible. I love it. I’ve wanted to do this for years and years,” Watson wrote. “It’s the most liberating thing ever. Hope you like. Big love from Emma.”

>> Liberation: Cut your hair short and love it!

Emma Watson told EW.com, “The stylist just grabbed the back of my hair and took a whole ponytail of hair out. It felt amazing. I love it.”

Rodney Cutler of the Cutler Salon in New York is responsible for Watson’s close cut.

“I missed all the experimentations teenagers go through,” Watson added. “I’ve wanted to do this since I was about 16, so as soon as I had the chance I was like: Right. This is it.”

Fans can see one last glimpse of Emma Watson’s famous waves as she reprises her role of Hermione Granger in Harry Potter and the Deathly Hollows part 1, which hits theaters November 19. Part 2 is due out next summer.

Tell SheKnows what you think of Emma Watson’s new cut. Is it pixie perfect or pretty potent? You be the judge.