The View’s Whoopi Goldberg had some choice words for The Real Housewives of DC‘s Michaele Salahi after an altercation between the two on The View. 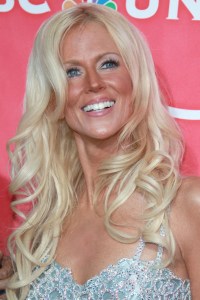 During the August 4 taping of The View, Michaele Salahi was being interviewed by Joy Behar and Sherri Shepherd. Apparently, Whoopi Goldberg wanted to switch topics and spice things up. Goldberg came from backstage, touched Salahi’s arm and asked, “Can we get back to the White House, please?” This was in response to Michaele Salahi famously crashing President Barack Obama’s State Dinner last year.

This started an all out gossip event, pitting the two in a war of words, with Michaele Salahi spewing allegations that Whoopi Goldberg hit her.

To clear up any misunderstandings on her end, Whoopi Goldberg responded the next day on The View.

“Afterward, Michaele was very upset,” Whoopi said on The View Thursday. “Then I was told that she thought I hit her. So I went up to her and I told her that she knew I didn’t hit her, and yeah, you know how I said it — choice words.”

Goldberg also added, “I make no apologies for my choice words.”

Whoopi Goldberg went on to explain that Salahi’s husband “got in my face, had his BlackBerry out and started taking pictures of me. Needless to say, I really went off then and there were even more choicer words.”

Goldberg joked to the audience, “I mean, they were so choice you could have cut them with a knife and eaten them.”

Michaele Salahi took to Access Hollywood to tell her side of the story, saying she was shocked by Whoopi Goldberg and that Salahi never said Whoopi hit her.

“I never said that. So she came in and said: Did you say I hit you? F-that! And it was like F every other thing, and I’m not used to that,” Salahi said of Whoopi Goldberg’s behavior.

Michaele Salahi’s husband also stated, “I said: Please don’t address my wife and please apologize to my wife for this abusive language you are saying to my wife.”

One would think a couple on a Bravo show titled, The Real Housewives of DC, would be used to the drama but that’s not the case for these party crashers.

“It’s all silly and unnecessary,” Michaele Salahi added. “No one needs to go on a talk show and have all this craziness.”